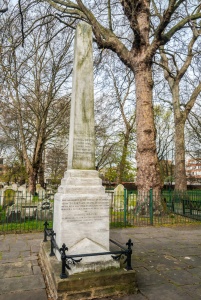 Daniel Defoe was born in 1660 to James Foe (note the spelling), a chandler in St. Giles, Cripplegate, London. In 1695 the younger Foe adopted the more aristocratic sounding "Defoe" as his surname.

Defoe trained for the ministry at Morton's Academy for Dissenters, but he never followed through on this plan, and instead worked briefly as a hosiery merchant before serving as a soldier for the king during Monmouth's Rebellion.

After that short-lived revolt was speedily put down, Defoe returned to hosiery, and built a successful company. He travelled widely on the continent in the course of his business, and was recruited by the government to act as a spy, a role in which he seems to have delighted.

Defoe was a prolific writer, and the first publication we know of appeared in 1688, but it was his The True Born Englishman (1701) which propelled him into the limelight. This poem attacked those who thought England should not have a foreign-born king, and not surprisingly, King William became a firm supporter of Defoe and his work.

His subsequent publications, including The Review newspaper, were not so well received by those in positions of power. Defoe managed to anger the Anglican Church and the Whig Party in turn, and each had him thrown into prison for a time.

Perhaps these experiences made him wary of the dangers inherent in political commentary, for in 1719 Defoe turned to fiction, writing Robinson Crusoe, based on the true account of a shipwrecked mariner. He followed the success of Crusoe with Captain Singleton (1720), Journal of the Plague Year (1722), Captain Jack (1722), Moll Flanders (1722), and Roxanda (1724).

Defoe did not confine himself to fiction; he also wrote several popular travel books, including the vivid Tour Through the Whole Island of Great Britain (1724-27). Before his death in 1731, Daniel Defoe published over 500 books and pamphlets.

Defoe is regarded as one of the founders of the English novel. Before his time fiction was primarily written in verse or in the form of plays, but Defoe and, to a lesser extent, Samuel Richardson, developed a new form of storytelling - one which remains with us today. He can also be credited with being one of the founding fathers of English journalism (whether that is a positive thing is open to debate).