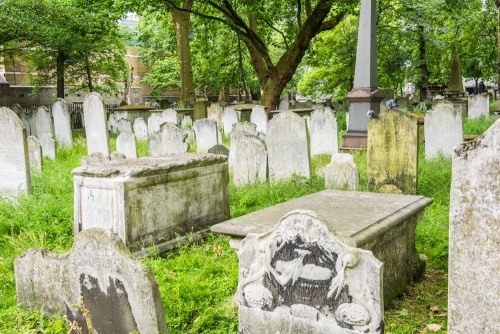 Bunhill Fields is a burial ground in the Islington district of north London, used as a cemetery from 1665 to 1854. The site was frequently used for burials of non-Conformists, and houses memorials to a number of famous people, including Isaac Watts, William Blake, John Bunyan, George Fox, and Daniel Defoe. 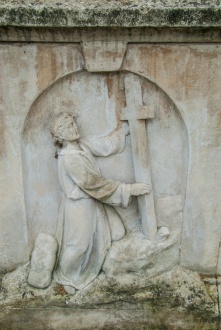 The carved base of
John Bunyan's memorial

Bunhill Fields was originally part of the Finsbury manor. The name Bunhill probably derives from 'Bone Hill', a reference to the fact that burials took place here since at least the Saxon era. In the medieval period, it was also used as a dumping ground for bones from St Paul's charnel house.

The burial ground was enclosed by the City of London Corporation to take burials after the Great Plague of 1665. The ground was never consecrated, so it thus became popular as a burial place for non-Conformists. Immediately beside Bunhill Fields is the Quaker Burying Ground, purchased by Quakers (or, as they should more properly be called, The Religious Society of Friends) as a burial ground in 1661.

By the time the burial ground was closed on 5 January 1854, something along the lines of 120,000 burials had taken place at Bunhill, a quite astonishing number given the small area of the grounds (about 4 hectares). After it was closed to burials, Bunhill Fields was converted into a landscaped park.

Most of the historical monuments and grave markers can still be seen. Those to William Blake, Daniel Defoe, and John Bunyan are in a central paved area, while most of the other monuments are behind iron railings in a landscaped area.

Directly opposite the City Road entrance to Bunhill Fields is Wesley's Chapel, used by John Wesley as a London base from 1778. 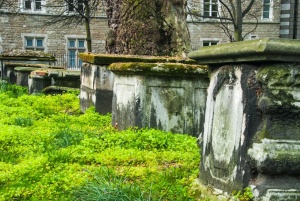 Inside the burial ground is a map showing some of the most historically important gravesites. Unfortunately, every time I have visited, the pathways that wind through the burial ground's exterior sections have been locked, restricting visitors to the paved central area.

Luckily, this area encompasses the graves of several famous people, including Blake, Defoe, and Bunyan, as mentioned above. Just be aware that if the outer paths are locked you won't be able to access all the gravesites.

But some of the most fascinating historical monuments are not necessarily those of famous people.

For example, one grave that caught my eye was that of Dame Mary Page, widow of Sir Gregory Page, Bt., who died in 1728 at the age of 56. Dame Mary's epitaph is quite descriptive of her final days. It reads, 'In 67 months she was tap'd 66 times and had taken away 240 gallons of water without ever repining at her case or ever fearing the operation'. In other words, her doctors bled her 66 times in 67 months. The poor woman probably didn't have the energy to 'repine her case'.

Bunhill Fields Burial Ground is on City Road, roughly five minutes walk south of Old Street tube station. There is another entrance on Bunhill Row, which runs parallel to City Road on the western edge of the Burial Ground. 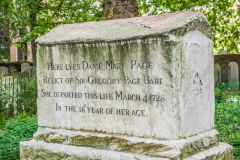 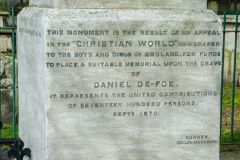