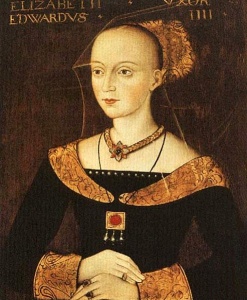 Family
Elizabeth Woodville was one of 13 children born to Richard Woodville (later named Baron Rivers) and Jacquetta of Luxembourg, widow of Henry V's brother John, Duke of Bedford. So, though the Woodville family certainly had connections Elizabeth was not considered nobility, a fact which would come to be quite significant later in her life. We do not know the exact date of her birth; all we can say for certain is that it was around 1437 and that she was born in Grafton Regis, Northamptonshire.

First Marriage
In 1452 Elizabeth married Sir John Grey of Groby. Together they had two sons. Sir John was a supporter of the Lancastrian cause, and died fighting at the Second Battle of St Albans in 1461 against the Yorkist leader, Edward, Duke of York. With the tide of the Wars of the Roses turning to the Yorkist cause, Woodville was an outcast. Her husband's lands were seized by the crown, and she was forced to live with her parents at Grafton.

Marriage to Edward IV
But fate took a hand. Edward was hunting near Grafton, and Elizabeth took a chance to arrange a 'chance' meeting, putting herself and her children on Edward's path, and using the opportunity to plead for the return of her husband's estates. Whether Elizabeth set out to attract Edward, a notoriously rapacious womanizer, is an open question, but attract him she did. It may have helped that she was described as a famous beauty. In 1464 the pair were married, and Elizabeth was crowned as queen on 26 May 1465. They would eventually have 10 children, including 7 girls, 5 of whom lived to adulthood.

Was the Marriage Legitimate?
Before Edward and Elizabeth married he had been previously betrothed to another lady. If someone today married one person while engaged to another it might put a few noses out of joint but that's about all. However, things were quite different in the 15th century. An engagement had almost the same legally binding status as a marriage. In a technical sense, an officially engaged person was already married.

So if Edward was already legally married through his engagement, then the marriage to Elizabeth was null and void. And, of course, any children born after the marriage would be illegitimate. That would mean that Edward, Prince of Wales, and Richard, Duke of York, children of Edward and Elizabeth, were bastards.

This was indeed one argument later used by supporters of Richard, Duke of Gloucester (Richard III), after Edward's death. He claimed that since his brother had never legally married Elizabeth, his nephews were then illegitimate and could not inherit the throne. He put the two boys in the Tower of London, where they soon disappeared.

Were the two 'Princes in the Tower' legitimate or not? The waters of controversy are muddied still further; it was persistently claimed at the time (chiefly by Edward's enemies) that the priest who performed the marriage ceremony for Edward and Elizabeth was in fact, a fraudster. In fact, it was further claimed that Edward frequently employed the same tactic of going through a sham marriage with his puppet priest just to gain a willing 'wife' to warm his bed.

Today such a marriage would be the occasion of some gossip, but in the late Middle Ages it was much more than that. Elizabeth was a commoner, a widow, and five years older than Edward. She was also his subject. To say that Edward upset the social applecart by marrying Elizabeth Woodville is an understatement of some magnitude. To be fair to the newlyweds, no matter who Edward had chosen to marry it would have upset a number of powerful people. Edward's place upon the throne was maintained through a precarious balancing act, carefully favouring important allies in exchange for their support.

He essentially tried to maintain stability by patronage, granting high office to the Nevilles in the north, Humphrey Stafford in the south west, and the Earl of Pembroke in south Wales. He relied on the support of a small circle of these nobles to maintain his authority. Marriage to Elizabeth was not at all part of the scenario envisaged by the nobility. The Earl of Warwick (The Kingmaker) in particular, was outraged. He had been engaged in secret negotiations with France to marry Edward to a French princess. When Edward's marriage was revealed, Warwick was personally embarrassed and politically undermined. His relationship with Edward soured and he eventually threw in his weight with Edward's enemies.

Elizabeth was enormously resented by the established nobility at court. Her popularity was not helped by her ambitious relatives. Elizabeth had five brothers and seven unmarried sisters, not to mention her two previous children by John Grey. and one by one advantageous marriages were found for them. The Woodville family gained enormous influence and were granted large estates in Wales.

Predictably, the more the Woodvilles gained influence, and the more Edward relied on his wife's family, the greater was the resentment against them, and against the queen. Did she deserve this unpopularity? Did she, as her enemies suggested, unduly use her influence with Edward to advance her own family? Well, of course, she did, but so, too, did all the other noble families at court. It probably upset the nobility more that her influence lessened their own.

Edward's Death
In 1483 Edward died, at the comparatively young age of 40. Critical chroniclers of the day were quick to attribute his death to a dissolute life, and they may not have been wrong. But her husband's death left Elizabeth and her two sons in trouble. Edward's authority had rested in the support of a small group of influential nobles, but in the course of gaining their support he had managed to alienate almost everyone else. The stability of Edward's reign came tumbling down like a deck of cards in a high wind.

Richard of Gloucester, Edward's younger brother, seized the Prince of Wales, and threw the queen's brother, Lord Rivers, and son, Thomas Grey, into prison. The latter were soon executed as traitors. Elizabeth took refuge in Westminster Abbey with the young Duke of York, but she was then either threatened or cajoled into handing him over to Richard. The two princes were placed in the Tower of London, and Richard made his bid for the throne.

Richard based his bid on the claim that his brother Edward himself was illegitimate. This subject has been the matter of no little debate; it seems that nine months before Edward's birth his mother, Cecily Neville, and father, Richard of York, were in two different places while Richard was campaigning in France, giving rise to the rumour that his mother had taken a lover, and thus, Edward was a bastard.

Based on Richard's claims, Edward's children were declared illegitimate by an acquiescent Parliament, and Richard was crowned. Elizabeth, now styled simply 'Dame Elizabeth Grey', was stripped of all her lands granted by Edward IV. While still in sanctuary she plotted to oust Richard and put her son on the throne. After it was suspected that the 'Princes in the Tower' were dead, she threw her support behind an alliance with Richard's enemy, Henry Tudor, Earl of Richmond. Henry, himself exiled in France, agreed to marry her daughter Elizabeth, now the Yorkist heir.

In March 1484 Elizabeth left sanctuary and returned to court, assured by Richard that she and her daughters would be unharmed. When Richard's own wife died, it was rumoured that he was planning to marry the younger Elizabeth himself. Though such a move would have made dynastic sense, it never took place, perhaps because by now Richard was suspected of murdering the two princes in the Tower, and marriage to his own niece would not have helped his cause. Also, the nobles who had received the confiscated Woodville estates did not want to give them back, and pressured Richard to avoid the marriage!

In 1485 Henry of Richmond invaded, defeated Richard at the Battle of Bosworth, was crowned as Henry VII, and promptly carried out his vow to marry Elizabeth of York. Elizabeth Woodville was named Dowager Queen. Oddly, instead of returning to court under Henry, Elizabeth lived out the final few years of her life at Bermondsey Abbey.

Historians are divided as to why she retreated from public life. Perhaps she simply wanted to live a quiet, contemplative existence, as many women of means chose to do in those days. Perhaps she was forced into exile by Henry, or decided to beat a hasty retreat after becoming embroiled in Lambert Simnel's abortive bid for the throne in 1487.

Whatever the reason, Elizabeth lived the final five years of her life at Bermondsey, where she died on 8 June 1492. She was buried in St George's Chapel at Windsor Castle and lies beside her second husband, Edward IV.