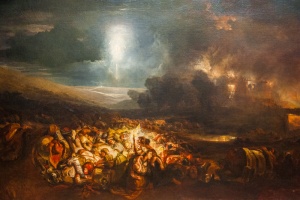 Joseph Mallord William Turner enjoys a reputation as one of the finest landscape painters in English history. The son of a London barber, Turner was born on April 23, 1775. His mother died when he was still young, and young Joseph received only the most rudimentary of education from his father.

From early childhood, Turner poured his energies into drawing, and later painting. By the age of 13, he was exhibiting paintings in the window of his father's barber shop. The child prodigy was rewarded when one of his paintings was shown at the Royal Academy - a remarkable honour for a lad of just 15! At 18 Turner established his own studio, and he was made a full member of the Royal Academy in 1802.

Turner's artistic education continued during extended travels abroad. He was captivated by the seascapes of Venice and devoted his energies to capturing the changing patterns of light and colour on the water.

Although Turner worked extensively in oils, it is as a watercolourist that he is famous. He can be rightly regarded as one of the founding fathers of English watercolour landscape painting.

One of Turner's unique qualities is that he did not attempt to reproduce what he saw, but rather he tried to paint what he felt about a scene. In this, he can be considered an early "Impressionist" painter. His best works exhibit a glorious, hazy wash of light, with shapes merely suggested through the light.

Despite popular acceptance of his work, Turner was a reclusive man, with few friends. He always worked alone and travelled alone. He would exhibit his paintings, but he often refused to sell them. When he did sell a work, he plunged into depression.

JMW Turner died on December 19, 1851, and at his own request, he was buried in St. Paul's Cathedral. His remarkable collection of over 300 paintings, 20,000 watercolours, and 19,000 drawings were bequeathed to the nation. The Clore Gallery at the Tate Gallery was opened in 1987 to display this collection, according to the terms of his will.

Some of his most enduring works are Burial at Sea, and The Grand Canal, Venice.

This queen was married at 11 to the Holy Roman Emperor, Henry V


She was the daughter of Henry I

She fought for the throne with Stephen