Castles in England and Wales 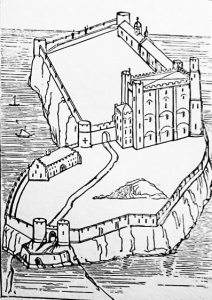 The castle was a special kind of manor holding. Usually, castles could only be built by the approval of the king, who wanted to ensure that any well-fortified castle was in the hands of someone he could trust. In times of anarchy there was generally an outbreak of illegal castle building and fortification.

The Norman conquerors developed castle building into a fine art. They had to; it was such a turbulent and insecure period that defence was a necessity of life. When most people think of castles they tend to picture a massive stone structure, but before 1100 castles were primarily thatched wooden buildings on the motte and bailey plan.

The castle was built on top of a large artificial or natural mound (the motte), surrounded by a deep ditch. Around this was an area of land called the bailey. Inside the bailey were various buildings for the people who lived and worked in the castle, including stables, storehouses, bakeries, kitchens, cottages, and quarters for soldiers.

The bailey was surrounded by a wooden palisade and an outer ditch, or fosse. Sometimes the fosse was filled with water diverted from a nearby stream. There are no good examples of these early motte and bailey castles remaining. Most were rebuilt in the early and mid 12th century as stone donjons, or keeps. 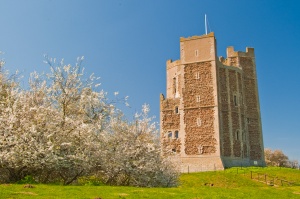 Orford Castle keep, Suffolk
Early Keeps
Shell keeps, of which few survive, were set on artificial or natural mounds. Stone walls 8-10 feet thick and 20-25 feet high enclosed a circular or polygonal area of 40-100 feet in diameter. Within the walls, residential buildings in stone and possibly wood were built. A stronger design was the square or rectangular Norman keep which developed mainly in the middle and late 12th century.

These immensely strong keeps were too heavy for artificial mounds and had to be built on natural high points. The keep walls were 20 feet thick at the base, rising to over 100 feet in height. Bedchambers, garderobes (latrines), and passages were built inside the thickness of the walls. Corner turrets provided an unobstructed line of sight along each wall.

The basement of the keep was used for storage, and possibly dungeons, although the dungeons might be on a separate, deeper level. The ground floor was the domain of soldiers and servants. The first floor contained the great hall, the centre of life in the castle. The second floor housed the lord and his family, and often contained a chapel built into the wall.

The roof above boasted the kitchens and ovens. In times of war, these could be easily converted to heat up oil, water, burning brands, or sand to hurl at enemies. Sand? Yes, sand. When hot sand was poured on enemies attempting to scale the walls it got into their armour and caused severe discomfort and itching.

An outer defensive wall surrounded the keep. The main doorway was protected by a second tower or set of towers. This gatehouse or barbican was pierced by a portcullis of iron and wood which could be raised or lowered on heavy chains. A ditch might surround the whole keep.

The keeps were ideal for the time in which they were built, but by the middle of the 13th century, needs had changed. A base that could be used for offensive operations rather than as a purely defensive stronghold was needed. So the keep was discarded in favour of a concentric design. These castles are often called "Edwardian" after Edward I, who perfected the style in the castles he built in Scotland and Wales. 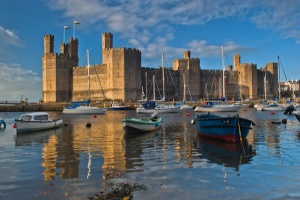 Caernarfon Castle, built by Edward I

Concentric castles have no central strong point like a keep. Instead, they rely on rings of walls, one inside the other, with towers along the length of the walls. Most Edwardian castles have three concentric rings of walls and towers. The central space was kept as an open courtyard around which were clustered separate domestic buildings. The outer wall was ringed by a moat with access over a draw bridge through a separate gatehouse or barbican. Several Norman keeps were converted into concentric castles. The central keep was retained for accommodation.

Defensive needs declined in after the 14th century, and the invention of canons made castles less easy to defend in any case. Attention shifted from defence to comfort and accommodation. Large castles became palaces, and smaller ones became fortified manor houses.

Meals in the castle were held in the great hall, on long trestle tables. The lord's table was raised on a dais at one end of the hall. At the other tables, guests were arranged by social standing. The lower classes were seated on the far side of the salt cellar ("below the salt"). Diners were often entertained by musicians seated in a gallery, or loft, overlooking the hall. Other entertainers were jugglers, acrobats, and troubadours. Troubadours might be retained by the lord, or they could be travelling musicians, spreading news and gossip as they travelled through the country. Their repertoire consisted of "chansons de geste", or songs of deeds, and "chansons d'amour", or songs of love.