Feudalism
The social structure of the Middle Ages was organized round the system of Feudalism. Feudalism in practice meant that the country was not governed by the king but by individual lords, or barons, who administered their own estates, dispensed their own justice, minted their own money, levied taxes and tolls, and demanded military service from vassals.

Usually, the lords could field greater armies than the king. In theory, the king was the chief feudal lord, but in reality, the individual lords were supreme in their own territory. Many kings were little more than figurehead rulers. 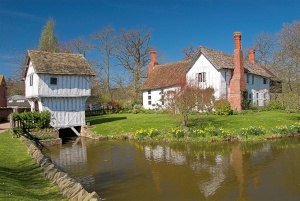 Feudal Ties
Feudalism was built upon a relationship of obligation and mutual service between vassals and lords. A vassal held his land, or fief, as a grant from a lord. When a vassal died, his heir was required to publicly renew his oath of faithfulness (fealty) to his lord (suzerain). This public oath was called "homage".

A Vassal's Obligations
The vassal was required to attend the lord at his court, help administer justice, and contribute money if needed. He must answer a summons to battle, bringing an agreed-upon number of fighting men. As well, he must feed and house the lord and his company when they travelled across his land.

This last obligation could be an onerous one. William the Conqueror travelled with a very large household, and if they extended their stay it could nearly bankrupt the lord hosting them. In a few days of Christmas feasting one year, William and his retinue consumed 6,000 chickens, 1,000 rabbits, 90 boars, 50 peacocks, 200 geese, 10,000 eels, thousands of eggs and loaves of bread, and hundreds of casks of wine and cider.

A Lord's Obligations
On the lord's side, he was obliged to protect the vassal, give military aid, and guard his children. If a daughter inherited, the lord arranged her marriage. If there were no heirs the lord disposed of the fief as he chose.

Manors
Manors, not villages, were the economic and social units of life in the early Middle Ages. A manor consisted of a manor house, one or more villages, and up to several thousand acres of land divided into meadow, pasture, forest, and cultivated fields.

The fields were further divided into strips; 1/3 for the lord of the manor, less for the church, and the remainder for the peasants and serfs. This land was shared out so that each person had an equal share of good and poor.

At least half the work week was spent on the land belonging to the lord and the church. Time might also be spent doing maintenance and on special projects such as clearing land, cutting firewood, and building roads and bridges. The rest of the time the villagers were free to work their own land.

Food and Drink
The fare at the lord's table was as full of variety as the peasant's was spare. Meat, fish, pastries, cabbage, turnips, onions, carrots, beans, and peas were common, as well as fresh bread, cheese, and fruit. At a feast, spitted boar, roast swan, or peacock might be added.

Wine or ale was drunk, never water, which was rightly considered suspect. Ale was the most common drink, but it was not the heady alcoholic drink we might imagine. It was thin, weak, and drunk soon after brewing. It must have had little effect on sobriety. Fruit juices and honey were the only sweeteners, and spices were almost unknown until after the Crusades.

Table Manners
Meat was cut with daggers and all eating was done with the fingers from trenchers (hollowed-out husks of bread). One trencher was used by two people, and one drinking cup. Scraps were thrown on the floor for the dogs to finish. There were no chimneys, and the fireplace was in the middle of the hall. Smoke escaped by the way of louvres in the roof (at least in theory).

House Layout
In the early medieval period the centre of life in castles and manors was the great hall, a huge, multipurpose chamber safely built upon the second floor. These halls were dimly lit, due to the need for massive walls with small windows for defence from attack.

In the 14th century the hall descended to the ground floor, and windows grew in size, indicating increased security. The solar, or family room, remained on the first floor

It became the custom for the family to eat in the solar, leaving the great hall to minor guests and servants. Hall life decreased as trade increased. Trades specialized and tradesmen and women moved out of the hall. The communal life of the hall declined and families became more private. Manors sustained fewer people as trades separated from the manor community.

The Peasant's Life
Villages consisted of from 10-60 families living in rough huts on dirt floors, with no chimneys or windows. Often, one end of the hut was given over to storing livestock. Furnishings were sparse; three-legged stools, a trestle table, beds on the floor softened with straw or leaves.

The peasant diet was mainly porridge, cheese, black bread, and a few home-grown vegetables. Peasants had a hard life, but they did not work on Sundays or on the frequent saints' days, and they could go to nearby fairs and markets. The lot of serfs was much harsher.

The Serf's Life
Although not technically a slave, a serf was bound to a lord for life. He could own no property and needed the lord's permission to marry. Under no circumstance could a serf leave the land without the lord's permission unless he chose to run away. If he ran to a town and managed to stay there for a year and a day, he was a free man.