Few things have helped create the look of the English countryside more than hedgerows. Hedges have been used for a long time in England, yet for all their antiquity, much of the familiar checkerboard pattern they help create is of very recent vintage. 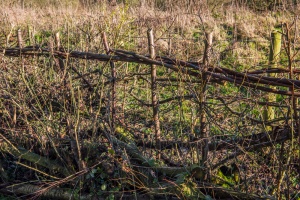 A hedgerow being laid in
Little Wittenham, Oxfordshire

Hedges have been used as field boundaries in England since the times of the Romans. Excavations at Farmoor (Oxon) reveals Roman hedges made of thorn. The Anglo-Saxons also used hedgerows extensively, and many that were used as estate boundaries still exist. Although these early hedges were used as field enclosures or to mark the boundaries of one person's property, there was no systematic planting of hedges in England until the first enclosure movement of the 13th century.

The pressures of population expansion led to a widespread clearing of land for agriculture, and the new fields needed to be marked clearly.

Later, farming expansion in the 15th century led to more widespread hedge planting, but the greatest use of hedges came in the Enclosure Movement of the 18th and 19th centuries.

The Enclosure Movement is a fancy term that historians use to describe the habit of wealthy landowners enclosing common fields for their own use, usually for the purpose of raising sheep.

Hedges are used as field boundaries in the lowland regions of England. In the highlands, such as the Yorkshire Dales, dry stone walls are commonly used.

So great was the need for hedges during the Enclosures, that a whole new industry sprang up supplying hawthorn plants to be used in planting new hedges. In the process of enclosure, many rural labourers lost their livelihood and had to move to the new industrial urban centres.

So the next time you sigh over the timeless quality of the English hedge-shaped countryside, spare a thought for the misery and hardship caused by the erection of hedged fields to much of England's rural population.

When: Roman, Anglo-Saxon, 13thC, 15thC, 18th-19thC
Where: Lowland areas
Why: Field boundaries
How: planting bushes or trees and pleating them together at an angle as they grew
Materials: huge variety based on local availability, but the most common were hawthorn, blackthorn, and holly

A lot of effort and ingenuity has been brought to bear on the problem of dating hedges. Several historians have advanced mathematical formulae for calculating the age of a hedgerow based on the number of plant species found in a certain length of hedge. As an extremely rough rule of thumb, one species of hedge plant per 100 years seems to get close to the truth.

Unfortunately, recent years have seen the disappearance of many miles of English hedgerows. It is easier for modern farmers to string new metal fence wire than to maintain ancient hedgerows. Conservation efforts have introduced incentives to farmers to maintain the hedges, and losses have slowed somewhat. Estimates vary, but there may be upwards of 500,000 miles of hedgerows in England today.

Don't miss our Gazetteer of Gardens