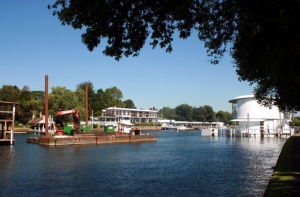 In 1829 a boat race challenge was held between teams representing the universities of Oxford and Cambridge. The venue chosen was a straight stretch of the Thames at the small town of Henley (or more properly, Henley-on-Thames). So popular did the race prove that the town of Henley realized they were onto a good thing.

A public meeting was held at the Henley Town Hall, and the decision was made to make boat racing at Henley an annual event.

Even though "The Boat Race" between the university teams was moved to a course closer to London, the first Henley Regatta was inaugurated in 1839.

There have been four race courses at Henley. The first (The Old Course - 1839-1885) began on the Berkshire side of Temple Island and ran to Henley Bridge. That course was 1 mile, 550 yards long. The "New Course" (1886-1922 started on the Buckinghamshire side but had two slight bends in it.

In 1923 the start was moved back and a straight course reintroduced, and finally in 1924, the current course was made by cutting away the bank to produce a straight line of the original length. The odd length of the race course is purely the result of necessity, as that was the length of the straightest bits of the Thames near the town.

The rowing events are somewhat unusual, as head-to-head elimination races between two teams take the place of the usual international races of 6-8 teams at once. 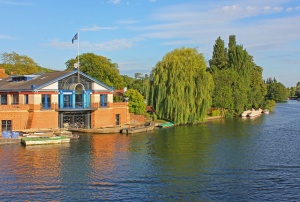 The narrowness of the river accounts for some of this difference. Races take approximately seven minutes to complete, and starts are scheduled every 5 minutes, so there can be two races happening at the same time.

Sixteen separate trophies are awarded, the most prestigious being the Grand Challenge Cup for eights. Every year teams from all over the world descend upon Henley, 1998 seeing the highest number of entries with 552 teams in total.

The regatta proper takes up five days in early July, but for weeks either side of the event the river banks are crammed with marquees and observation stands. There are now so many entries for events that qualifying races are held throughout the week before the regatta proper, so if you'd like to take in world-class rowing without the crowds, arrive then.

Throughout the Victorian period, Henley became a major social event, and the regatta is still descended upon by the English upper classes every year.

In 1851 Prince Albert, the Prince Consort, became the first royal patron of the regatta, granting it the right to be called the Henley Royal Regatta Since the death of Albert, every reigning monarch has agreed to be the official patron of the event, and members of the royal family frequently attend the races.

It is a sporting event, to be sure, but it is also a place to see men decked out in straw-boater hats and striped blazers, and women in frocks that cost as much as one of the rowing sculls on the water. The ambiance is one of a large Edwardian garden party.

Admission to the prestigious Steward's Enclosure is limited to 6,000 Members, and those members pay dearly for the privilege. Despite this, there is a long waiting list for Membership.

Members subscriptions and the additional fees they pay for guests cover most of the annual £1.4 million cost of the event. There is no commercial sponsorship allowed at Henley, and the organizers are justifiably proud of this fact.

Henley itself is a lovely town, with many medieval buildings of character and charm, including the church of Saint Mary, which has 13th-century underpinnings beneath its Victorian facade. There is a 14th-century chantry house attached to the church.

The Speaker's House was home to William Lenthall, Speaker of the House of Commons between 1629-1640. Lenthall was one of the signatories of the death warrant passed on Charles I. There are wonderful walks along the riverside, and the Thames Trail national path passes through Henley on its route from the Cotswolds to London.

More about the Henley Royal Regatta:

He would resign in 1905 after power struggle with Lord Kitchener