See also our Illustrated Dictionary of Church History and Architecture - A visual guide to British Churches from Saxon to Victorian Gothic. 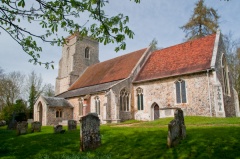 Altar
The holiest part of a church. In the medieval period, the altar was a table or rectangular slab made of stone or marble, often set upon a raised step. After the Reformation, the stone altars were replaced by wooden communion tables.

Ambulatory
A covered passage behind the altar, linking it with chapels at the east end of the church.

Apse
The domed or vaulted east end of the church. In Britain, the apse is generally squared off, while on the continent, rounded apses were common.

Baptistery
Where the font was stored and baptisms were performed, generally near the west door. Sometimes a screen or grille separates the baptistery from the nave.

Bell Tower
A tower where the church bells were installed. This could be separate from the church, or, more usually, attached. Sometimes called a campanile.

Chancel
The eastern end of a church. The high altar is frequently situated at the east end of the chancel.

Chancel Arch
The arch separating the chancel from the nave or crossing.

Chancel Screen
A screen dividing the chancel and the nave and crossing. Often called a rood screen.

Chapel
A small building or room set aside for worship. Large churches or cathedrals might have many chapels dedicated to different saints. A chantry chapel is a special chapel where prayers for the dead are said.

Chapter House
A special room or house where the governing body of a monastery or cathedral met. In Britain, the chapter house is usually polygonal in shape with a slender central column supporting the roof.

Chevet
Style of construction creating an ambulatory and radiating chapels at the eastern arm of a church.

Choir (quire)
Where services are sung, or more generally, the eastern arm of a church.

Clerestory
The upper story of a church where it rises above the aisle roof. Window openings allow extra light into the interior of the church.

Confessio
A niche for relics located near the altar.

Crossing
The area where the choir, nave, and transepts meet.

Crypt
A vaulted chamber made to house graves and relics, generally located beneath the chancel. Many crypts were very large, to allow numbers of pilgrims access.

Font
A container, generally of stone, which contained holy water for baptism. Usually located near the west door, sometimes the fonts had elaborately carved wooden canopies.

Greek-cross Plan
A style of church with four equal arms.

Latin-cross Plan
A church plan with one arm longer than the other three.

Lectern
A reading desk, often in the shape of an eagle, made to hold the Bible during services. Usually made of brass.

Misericord
From the Latin word for "mercy" comes this term which refers to pivoting wooden brackets in choir stalls which lifted up to provide relief for clergy who had to stand during long church services. Misericords are often ornately carved and decorative. 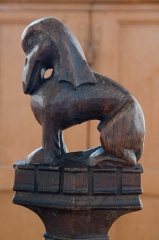 Nave
The western arm of the church, where the congregation stood.

Orientation
The compass alignment of the church. The altar is usually oriented to the east.

Pew
Wooden seats or benches in the church. Pews only appeared at the end of the medieval period. Often pews had carved bench-ends and were carved with animal or foliage designs.

Pulpit
A raised stand from which the preacher addresses the congregation. Usually reached by steps or stairs, often covered by a carved canopy.

Reredos
A decorative screen behind the altar, usually highly carved.

Retable
A ledge behind, or attached to, the high altar, where ornaments were placed.

Retro-choir
The area immediately behind the high altar.

Rood
A cross erected at the entry to the chancel. Roods often had figures of the Virgin Mary on one side and St. John on the other.

Rood Loft
The gallery upon which the rood is supported.

Rood Screen
A screen built beneath the rood loft.

Sanctuary
The high altar is placed here. This is considered the holiest part of the church.

Stalls
Divisions within the choir, where clergy sat (or stood) during service. The stalls are often richly carved and fitted with misericords to help the clergy stand comfortably during long services.

Stoup
A container for holy water near the west door. Can be built into the wall or free-standing.

Transepts
The crossing arms of the church, generally aligned north-south.

Triforium
A galleried arcade at the second-floor level, even with the aisle roof. Also called a "blind-storey" - the triforium looks like a row of window frames without window openings.

Vestry
A room where the clergy and choir dress and the vestments are kept.