One of the most familiar sights to travellers in southeast England is the distinctive conical or pyramid-shaped oast house. These oast houses are a reminder of Britain's once-thriving brewing industry.

It was not until the late 17th century that independent breweries began to appear. English ale was made from fermented malt, but it was not until beer was introduced from the Low Countries in 1400 that hops were added to the process the create beer. 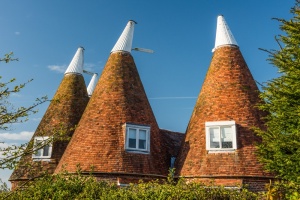 In the 15th century, hops began to be grown in Kent, and a flourishing brewing industry grew up in nearby London. Kent proved to have ideal soil for growing hops, and plenty of wood for the charcoal used in oast houses to dry the hops.

The main hop growing counties were Kent, Sussex, Surrey, Hampshire, Herefordshire, and Worcestershire. A hop market was set up at Little Eastcheap in London to feed the voracious demand of that city's breweries. The earliest oast house still in existence can be seen at Cranbrook, Kent. It was built about 1750.

Edward VI encouraged the brewing industry and it responding by growing rapidly. Commercial breweries replaced inn brewing almost entirely by 1700, and by 1840 there were over 50,000 separate breweries. However, just 40 years later that number had dropped by half. The turn of the 20th century saw only 3,000 breweries left, and today that number is closer to 200.

One of the most famous of the hop farms was that owned by the Whitbread brewery at Beltring in Kent, which was 300 acres in size and employed some 5,000 hop pickers. The hops were generally picked into bins, and transferred to the oast houses in sacks for drying.

The first place in Britain known to have brewed beer on a regular basis is Winchelsea, East Sussex, where that most "British" of drinks was introduced from the Low Countries in 1400.

There are usually three rooms in an oast; the kiln (oven), the drying room, and the cooling room. Kilns were fired by wood until the 17th century, then by charcoal, and more recently by oil. The hops were dried in the drying room usually located just above the kiln, then dragged into the cooling room, before being pressed or baled into packets for transport to the breweries.

The distinctive conical roof of the oast is necessary to create a good draught for the fire. The odd projections at the peak of the roof are cowls which can be pivoted to create just the right airflow for the kiln fire to draw properly. About 1830 the cowls were made redundant by the introduction of electric fans.

In recent years the acreage devoted to growing hops in Britain has fallen dramatically, as imported hops flood the market, leaving abandoned oast houses scattered across the former hop growing areas. Hops were picked entirely by hand until quite recently, but 1934 saw the introduction of a hop picking machine which effectively killed this labour-intensive industry.

Another distinctive building that arose as part of the brewing process is the "maltings" - a special building for sprouting and drying barley to create barley malt. Some of the maltings are still in use, but many have been converted to other uses - for example, Snape Maltings (Suffolk) is now one of the premier concert halls in Europe.

Although most hops are now imported and the hop industry has lost much of its former economic clout, the oast house remains a symbol of Britain's cultural heritage. So the next time you raise a glass in your favourite watering hole, take a moment to appreciate the years of history represented by that bubbling golden liquid. Cheers!

What important document was signed at Runnymede in 1215?


The signing was forced on King John by his rebellious barons