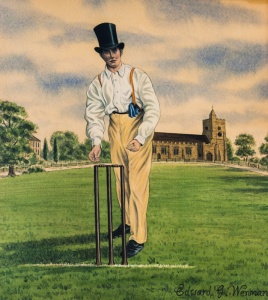 History
The origins of the game of cricket are lost in the mists of time. There is a reference in the household accounts of Edward I in 1300 of a game like cricket being played in Kent.

It seems clear that the English game originated in the sheep-rearing country of the South East, where the short grass of the downland pastures made it possible to bowl a ball of wool or rags at a target. That target was usually the wicket-gate of the sheep pasture, which was defended with a bat in the form of a shepherd's crooked staff.

By the 17th century the game was quite popular as a rough rural pastime, but in the following century the leisure classes took up the sport, particularly in Sussex, Kent, and London. We know that an organized match was held at the Artillery Grounds, Finsbury, London, in 1730. By the middle of the 18th century, cricket was being played at every level of society, from village greens to wealthy estates. However, the game lacked a coherent set of rules.

The first and most influential cricket club in the land was formed at Hambledon, Hampshire, in the 1760s. The club was sponsored by wealthy patrons, but the players were local tradesmen and farmers. The Hambledon club established techniques of batting and bowling which still hold today, and Hambledon claims a page in history books as the "Birthplace of Cricket".

The centre of power in the game soon shifted to London, most notably with the establishment of the Marylebone Cricket Club (MCC), which had its headquarters at Lord's ground. In 1835 the MCC gave cricket its first formal laws, which still stand largely intact today.

A major boost for the sport of cricket was provided by public schools such as Eton, Harrow, and Winchester. The sport proved so popular among the well-to-do students that an annual match called "Gentlemen vs. Players" took place at Lord's from 1806-1963. The amateur "Gentlemen" from the schools and universities played their semi-professional counterparts; the "Players" in a match that was a highlight of the season.

Major cricket matches can last as long as five days, with each side having two "innings", or turns at bat. A recent alternative to the longer matches are "limited over" matches. These events may take a relatively short 3-5 hours during the course of one day.

The game of cricket is now played worldwide, and despite occasional successes, it is fair to say that the real power in the game has shifted from England to nations such as South Africa, Australia, India, Pakistan, and the West Indies.

In England the major focus of the game is the county championships, with both four-day and one-day competitions running simultaneously during the summer months. But traditional village cricket is still played in towns and villages all across the UK.

The Rules of Cricket

As explained to a foreign visitor

Editor's note: The humorous piece of seeming nonsense above really does describe the game of cricket perfectly. It all makes sense, really.