Life as a Thatcher

Leo Wood lives in Welford, Northamptonshire and makes his living as a self-employed thatcher. He didn't plan a life working with this traditional craft.

"From school, I intended to follow in my father's footsteps as a chemical engineer but preferred working outdoors. I was helping a friend whose farmer father was ill with odd jobs weekends on the farm and working in the laboratory of a chrome plating plant full time. 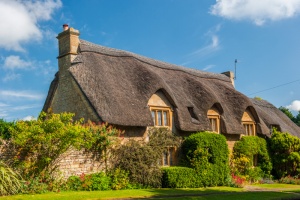 "I had no real intention of changing my job, but by chance, while helping on the farm a government agricultural employment agent came to try to arrange for a full-time worker on the farm.

"He literally dropped his paperwork and one of the cards was from a thatcher looking for an apprentice." That was the beginning of Leo's career as a thatcher. "When I started in1963 around 200 full-time thatchers were left, this is now around 2000 and has been so for five or six years.

So what's the most common comment Leo gets from people who see him thatching? "Easy, and bound to raise a laugh among thatchers; we all get it.... Tap on the ladder........ 'Not many of you blokes around these days'".

"The basic technique of thatching apart from better fastening methods have remained unchanged for hundreds of years and probably thousands. No matter what the material the thick cut end of the bundle is the only part seen outside.

"Starting at the bottom of the roof this is tied parallel onto the rafters around two thirds up the bundle. If it was left like this you would see a series of steps up the roof from the ends, this is still done in some African countries. In Europe, the ends are arranged so that all the end part is rearranged or cut parallel to the rafter covering the long stalk part of the bundle underneath.

"The distance from the weathering surface to the woodwork in Britain is generally not less than 12 inches but with some types of thatching I have seen up to 4 feet, This is due to a practice of not removing the old material back to the timbers but fastening a new one into and over the top of the old one."

"I have no preference in materials other than the longer lifespan of Norfolk Reed, they all have a place both economically for the house owner and the style of the area."

So what would Leo say to someone considering a career as a thatcher?

"Don’t if you want a reasonable living! It’s more of a way of life."

What's Leo's favourite thatched building? He laughs, "An easy question to answer, -MINE- apart from the fact I have not paid all the mortgage off yet. Bought semi-derelict 15 years ago it had been thatched since it was built in 1616, a corrugated iron roof had been put on in 1925 and yes I have not finished it yet, not even the thatching!

"It has hand-sawn Elm rafters. Hand Split Oak Battens circa. 1700. High Tensile Steel Fixing Rods (Sways) The large 'pins' are tools, thatching needles. The small ones are the fixing 'nails' or Hooks. It's only part of the ridge, the very top I haven't done yet. The whole house is 75 feet long taking 2,500 bundles of reed." 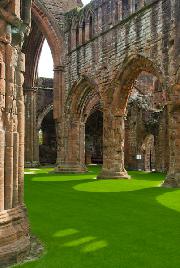