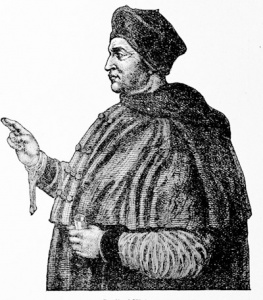 Thomas Wolsey (or "Wulcy" as he called himself), was born between 1471 and 1474 in Ipswich, the son of a prosperous merchant. Fanciful legend has always maintained that Wolsey was the son of a simple butcher, but there is no factual basis to bear this out.

Butcher or not, his father Robert could afford to send Thomas to be educated at Oxford University, where he was granted his degree at the tender age of only 15, a feat which earned him the sobriquet "the boy bachelor". In 1497 Wolsey was voted a full fellow (roughly equivalent to a modern professor) at Magdalen College. Shortly thereafter he was appointed master of the school there.

In 1498 he was ordained a priest of Marlborough (Wiltshire) under the patronage of the Bishop of Salisbury. More patronage was to earn him his second church post; the Marquis of Dorset, whose sons he taught at Magdalen, granted him the rectorship of Limington, Somerset, in 1500. A host of other benefices followed. In this Wolsey was following the accepted practice of his day, where many churchmen were official holders of numerous church positions, including rectorships of places they seldom if ever saw in person.

One of Wolsey's mounting number of church posts was as official chaplain to the Archbishop of Canterbury, Henry Dean. When Dean died in 1503, Wolsey became chaplain to Sir Richard Nanfan. It was this post that catapulted him to national power. Sir Richard noted his chaplain's genius for administration and empowered Wolsey to handle his financial affairs. He went so far as to present Wolsey to King Henry VII.

On Nanfan's death in 1507 Wolsey joined the royal court as one of its many chaplains. Here he attracted the notice and the friendship of Richard Fox, the powerful Bishop of Winchester.

At this time the king began to use Wolsey on diplomatic errands. In one famous episode, Henry bade Wolsey travel into Flanders as a special envoy to the court of the Emperor Maximillian. Wolsey travelled like a man possessed; he journeyed to Flanders and returned in three days. The king, believing him still preparing to leave, chided him for tardiness, and Wolsey was able to present his master with a fait accompli!

Wolsey's greatest contributions came as Master of the Rolls, in which post he initiated reforms which greatly eased the bureaucratic functioning of the court administration. During this time Wolsey also acquired a bewildering number of church posts, including Dean of Lincoln, and prebend of Hereford Cathedral.

When Henry VIII came to the throne in 1509 he continued his father's favour towards Wolsey, naming him royal almoner, and shortly after, a canon of Windsor, then registrar of the Order of the Garter.

Wolsey did not receive all these posts for nothing. Henry VIII had little of his father's interest or talent for administration, but he was quick to recognize Wolsey's talents and gave the churchman an increasing number of administrative tasks.

That in itself may have been enough to earn him the enmity of the nobility, but fuel was added to the fire when Henry began entrusting Wolsey with political power, both domestically and in international affairs. Wolsey could now afford to indulge his love of pomp and lavish living; he maintained a huge household and lived with a great show of expense. He built a superb palace beside the Thames at Richmond, called Hampton Court (later Hampton Court Palace).

He added the Bishopric of Lincoln in 1514, and the following year was named Archbishop (later Cardinal) of York. On 24 December 1515, he reached the zenith of his power when he was named Lord Chancellor of England. His power was so great, and his influence over Henry's policies so great that Wolsey was in some ways more king than the king himself!

In 1521 Pope Leo X died, and Wolsey entertained legitimate hopes of election to the Holy See. However, the support he needed from the Holy Roman Emperor, Charles, did not materialize, and Wolsey was left lacking the votes necessary for election. Two years later the new pope died, but once more Wolsey was deserted by Charles, and once more he was disappointed. There appears to be some doubt as to how much Wolsey really wanted the papacy; he protested his relief at not being named, and at least some historians tend to believe him.

Wolsey was increasingly unpopular within England, however. The nobility were jealous of his power, the people hated him for imposing new taxes, and everyone hated him for his extravagant lifestyle and lavish displays of wealth and power.

At this juncture Henry's personal life intervened. The king wished to rid himself of his queen, Katherine of Aragon, in order to marry Anne Boleyn. Katherine had been a thorn in Wolsey's side, favouring alliance with her nephew Charles, the Holy Roman Emperor, over Wolsey's policies in favour of the French. So Wolsey did what he could to help the king. He had Katherine's marriage declared invalid in his legatine court, hoping that the pope would then feel obliged to officially annul the marriage. Henry then sent Wolsey to persuade the French king to bring pressure to bear on the pope.

All the machinations of kings and emperors, church and state, at long last resulted in the Katherine's trial at Blackfriars, London, in 1519. In the process Wolsey made an enemy of Anne Boleyn, who held him responsible for the long delay in settling her status.

The trial failed, and Anne used her influence to bring about Wolsey's fall from royal favour. He was forced to surrender the Great Seal of England, and more painfully perhaps, to cede his possessions to Henry.

Although in disgrace, Wolsey was allowed to retain his living as Archbishop of York. He seems to have made a sincere effort to turn these last few months of his life to some good, and to perform his duties as an officer of the church with a commendable conscientiousness. His health, for many years suspect, now failed badly. In late 1530 Henry charged him with treason, and on the slow journey south from York to stand trial Wolsey died at Leicester Abbey.