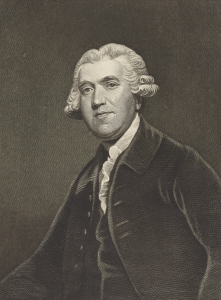 You could say that pottery was in Josiah Wedgwood's blood. Wedgwood (1730-1795) was the 12th child of potter Thomas Wedgwood, and his grandfather and great-grandfather had been potters, too.

His mother was determined to provide Josiah with a good education, so from the tender age of six, he walked seven miles to school every day in Newcastle-upon-Lyme. When his father died in 1739, Josiah left school to apprentice under his brother Thomas, who carried on the family business.

At the age of 12, Josiah was struck by smallpox, which kept him confined to bed for months. He spent his time reading and improving his mind - it was just as well, for his body was badly stricken by smallpox. He was left with a weak knee, which meant he was unable to operate the traditional potter's wheel. Instead, he improved his skills at modelling.

In his early 20's Joseph formed a partnership with the preeminent English potter of the day, Thomas Whieldon. Under Whieldon's eye, Wedgwood practised with glazing, bodies, shapes, and colours. In 1759 his dreams came true when two relatives leased him the Ivy House in Burslem to allow him to start his own pottery business. One of the greatest boosts to the business in those early years was an advantageous marriage to a distant cousin, Sarah Wedgwood, who brought a large dowry into the marriage.

Wedgwood's knee proved troublesome, and he eventually was forced to have it amputated - the operation performed without anaesthetic. In 1766 he bought Etruria, in Staffordshire, as a base for his factory and a magnificent new house.

Wedgwood was a constant innovator, a thinker, and a scientist. In 1782 he perfected a tool for measuring heat in kilns. On the basis of his work, Wedgwood was elected to the Royal Society in 1783.

The first major innovation Wedgwood introduced to the pottery field was the development of Queen's Ware, a cream-coloured, lead-glazed earthenware. This was durable china formed with a mixture of flint and white clay. In 1765 Wedgwood provided a tea service in this new material for Queen Charlotte, wife of George III. She was so pleased with it that she gave Wedgwood permission to call it Queen's Ware, and to style himself, "Potter to Her Majesty". Queen's Ware became an enormous success spread the name of Wedgwood across all of Europe.

In 1768 Wedgwood developed a fine black porcelain called Black Basalt. With this fine-grained stoneware he was able to produce copies of the newly excavated Etruscan pottery from Italy. The new innovation proved another huge commercial success. The surface was lustrous and smooth, with a purple-black sheen. Wedgwood's factory could scarcely keep up with the demand for candlesticks, medallions, tableware, and vases in the material.

The third major innovation for which Wedgwood is remembered was Jasper Ware, which has been described as the most important invention in the history of ceramics since the discovery of porcelain. It took Wedgwood years of experimentation to perfect his design for this unglazed stoneware with the uncanny ability to be both durable and delicate, and to take colours so evenly throughout its surface. Jasper can be almost any colour, although the most famous examples are are pale or dark blue and white.

The new material was used in an astonishing array of objects, including, of all things, a grand piano! Jasper Ware is also famous for the bas relief applied to the sides, often in imitation of classical Greek motifs.

Jasper Ware has been in production for over 200 years, and in that time the methods of production have changed hardly at all. It seems Joseph Wedgwood got it right the first time!

The Wedgwood Museum and Visitor Centre is located in Barlaston, Staffordshire. You can watch pottery being made, and even try your hand at "throwing" a pot yourself. There is a museum tracing the history of the Wedgwood company, a video theatre, and a gift shop where you can buy pottery direct from the works.

The first Tudor king of England

He was the father of Henry VIII