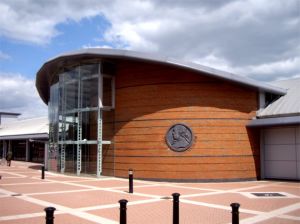 Wedgwood Museum & Visitor Centre
If this is Staffordshire, it must be time for another pottery museum. See the first pottery Josiah Wedgwood made way back in 1759, take a tour of the works, try your hand at "throwing" a pot, and buy a bargain in the factory "seconds" shop.
History
To call Josiah Wedgwood a potter is to understate his achievements. Wedgwood (1730-1795) was an innovator, inventor, and entrepreneur. During a lifetime in developing pottery he discovered new methods of making ceramics, from his famous Jasper Ware to Black Basalt porcelain and Queen's Ware, named for Queen Charlotte, who loved the style so much she granted Wedgwood the right to call himself 'Potter to Her Majesty'.

The seed for the Wedgwood Museum was planted by the founder himself. In 1774 he began to save samples from every design. It was not until well over a century after Wedgwood's death that the company discovered a large collection of early samples in a storeroom. The discovery prompted a search for other early samples around the factory and the resulting collection was opened to the public in 1906.

The museum collection was put into storage during WWI for safekeeping. Wedgwood's headquarters was then at Eturia, but the company moved to Barlaston in 1940. The museum was reopened in 1952, then expanded with a purpose-built visitor centre incorporating museum space, an art gallery, cinema, and viewing area.

The museum was completely redesigned in 1984 and included a gallery of Wedgwood family portraits. The latest new effort to make the Museum and Visitor Centre more user-friendly is the creation of a new World of Wedgwood, combining historical displays of ceramics, exhibits on Wedgwood and his family, shops, a cafe, a learning centre, and tours of the factory.

What to see
Collection highlights include novelty items like a black basalt bulb pot in the shape of a hedgehog, and a salad bowl shaped like a lobster. One fascinating exhibit is a tray of trial pieces for Jasper Ware, dated to 1773. Each piece is numbered and details for that trial noted in Josiah Wedgwood's 'Experiment Book'. Some of the pieces are imprinted with exact firing instructions. It is a fascinating glimpse into Wedgwood's world, where exacting trials and experiments were conducted to develop the processes needed to create his masterpiece porcelain pieces.