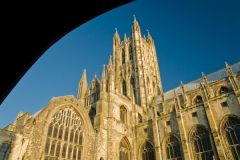 Visiting Canterbury Cathedral is not just about seeing the cathedral building, the cathedral sits within a walled precinct, with many historic buildings clustered around the great medieval church. The precinct includes the area of the medieval abbey. Several ruined arches from the medieval priory still stand to the rear of the cathedral.
Healing Garden
A modern herb garden has been planted on the site of the medieval monk's dormitory. Here you will find herbs which would have been used by the monks for healing purposes.

The Cloisters
This is a square, covered walk around a central green space. It would have been used by the monks for contemplation, and the covered walks also provided well-lit areas for reading and writing. The highlight of the cloisters is the superb vaulted roof, punctuated with wonderful painted bosses. Among these is an intriguing boss of an elderly man, which may represent Henry Yevele, the architect resonsible for much of the 14th century rebuilding of the cathedral. Leading off the cloister is the ...

Chapter House
This magnificent chamber is the largest chapter house in England. Here the monks would conduct their daily business and organize the running of the cathedral and priory. The height of the room is extraordinary. The central area of the chapter house is an open space, while stone seats ring the walls under arched stone niches. At the far end is a stone seat raised on a dais, where the prior would preside over meetings.

Dark Entry
A shadowed passage leads from the cathedral to Green Court, where the King's School is located. This passage is known as Dark Entry, and it is traditionally said to be haunted by the ghost of Nell Cook. There are various stories told about the unfortunate Cook; one says that she was buried alive beneath Dark Entry after murdering her employer, a cathedral canon. Another story says that anyone who sees her ghost is fated to die soon afterwards. Nell Cook's tale first appeared in The Ingoldsby Legends, by R.H. Barham, and, unfortunately for ghost hunters, appears to have been a figment of Barham's imagination.

However, other ghosts are said to haunt the cathedral; the figure of Archbishop Sudbury has been reported around the tower that bears his name. Sudbury was killed by angry peasants during The Peasant's Revolt in 1381. Another ghost is that of a monk who wanders the cloisters

The Water Tower
At the rear of the cathedral, behind the cloisters, stands a Romanesque gem; the 11th century Water Tower. This structure, raised on a series of intertwining arches, was built to handle the water supply to the priory buildings.

King's School
At the furthest extent of the cathedral precinct are the buildings of King's School, which can claim to be the oldest school in Britain. It seems very likely that there was a school attached to the original cathedral established by Augustine. The current school was established by Henry VIII in 1541. It uses many of the former monastic buildings used by the priory attached to Canterbury Cathedral, and is centred around Green Court, a wide lawn area within the cathedral precincts. Among the most famous alumni of King's School are playwright Christopher Marlowe and gardening pioneer John Tradescant.

Norman Staircase
At the furthest extent of the precinct from the gatehouse is the so-called Norman Staircase. This covered staircase is one of the finest examples of Norman architecture in the city. It was built around 1153 and led to a Poor Pilgrim's Hall, where pilgrims visiting the cathedral could find free lodging. The staircase is now part of King's School.

Christ Church Gate
Built facing Butter Market in 1517 by Prior Goldstone as a grand entry gate into the cathedral precinct, this is now the main visitor entrance to the cathedral. The surface is covered with elaborately carved and decorated heraldic symbols and coats of arms commemorating Arthur, Prince of Wales; the elder brother of Henry VIII. The gatehouse is dominated by a huge brass figure of Christ above the arch. The figure is a modern replacement for a medieval statue badly damaged during the Civil War, when Oliver Cromwell's troops used it for target practice! The original Tudor turrets were removed in 1830 but rebuilt in 1937. Spare a look at the wooden doors through the gateway; these are magnificently carved with heraldic designs. Overall, the Gate is a wonderful structure, a great example of the transition between Gothic and Renaissance styles.