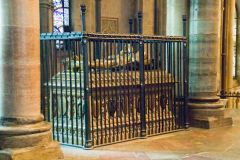 Canterbury Cathedral is a magnificent historic building, justly famous for its superb medieval architecture. Within the cathedral are a host of memorials and tombs of famous and influential people, dating back to 1205. There are numerous other burials in unknown places around the cathedral, dating back to the 7th century. Here are a selection of memorials, starting with those that you can visit, followed by those whose location is unknown.
Famous people buried in Canterbury Cathedral

Alphege, St (d. 1012)
Archbishop of Canterbury. In 1011 he was captured by Danes, who demanded a high ransom for his release. Alphege urged his people not to pay the ransom, and he was killed by his captors.

Anselm, St (Anselm of Canterbury) (1033-1109)
Archbishop, and often called the founder of scholasticism. He clashed with William II and Henry I over the respective powers of church and state.

Arundel, Thomas (1353-1414)
Archbishop, known for his opposition to the teachings of John Wycliffe and the Lollards.

Becket, Thomas (1118-1170)
Archbishop and saint, murdered in the Martyrdom by knights of Henry II. Miracles reported at his tomb resulted in Canterbury becoming the most popular pilgrimage destination in Britain. The site of Becket's shrine is marked by a candle in Trinity Chapel, and the site of his murder is marked by an altar and memorial in the Martyrdom.

Chichele, Henry (d. 1443)
Archbishop of Canterbury and founder of All Souls College, Oxford. His ornate memorial stands in the north aisle.

Edward, the Black Prince (1330-1376)
Son of King Edward III and Phillippa of Hainault, considered one of the great knights of the Age of Chivalry; a fierce warrior who would have inherited the throne had he lived. His memorial stands on the south side of Trinity Chapel.

Gibbons, Orrlando (1583-1625)
English composer and organist, the most famous British musician of his age.

Henry IV (1367-1413)
King who died from a disfiguring disease, probably leprosy. His ornate memorial stands on the north side of the Trinity Chapel, topped with carved effigies of Henry and Joan of Navarre.

Joan of Navarre (1370-1437)
Second wife of Henry IV, their joint memorial stands in the Trinity Chapel.

Lanfranc (1005-1089)
Archbishop of Canterbury. Reformed the English church along Norman lines, but also helped establish the independence of the English church from European interference. Helped ensure that William II succeeded to the throne instead of his brother Robert.

Langton, Stephen (1151 - 1228)
Archbishop, and supporter of the English barons in their struggle against King John that eventually led to the signing of the Magna Carta in 1215. He was originally buried outside the cathedral, but the Warrior's Chapel was built over the site of his grave and a memorial raised above the tomb.

Morton, John  (1420 - 1500)
Cardinal Archbishop of Canterbury. Imprisoned in the Tower of London by Richard III, but later released.

Sudbury, Simon of (1317 - 1381)
Archbishop, killed by an angry mob during the Peaants Revolt, and buried without his head. His ghost reportedly haunts the cathedral.

Walter, Hubert  (d. 1205)
Archbshop, crusader, and advisor to Richard I. His tomb is the oldest in the cathedral.

Warham, William
The last Archbishop before the Reformation. His tomb lies in the Martyrdom, near Becket's memorial.

Others - burial place unknown
Queen Bertha (d 597)
Bertha was the wife of King Ethelbert, and already a practicing Christian when St Augustine arrived in Kent in 597 AD. Her church of St Martins is the oldest known church in Britain still in use.

St Mildred (Mildred of Thanet)
A 7th century Kentish princess and daughter of the founder of Minster-in-Thanet nunnery, she later became abbess of that place.

Nothelm (d. 739)
11th Archbishop of Canterbury and saint. Helped supply the Venerable Bede with material for Bede's Ecclesiastical History of the English People.

Tatwine (d. 734 AD)
Archbishop, famous for his riddles, many of which have survived.