Richard II and the Peasant's Revolt 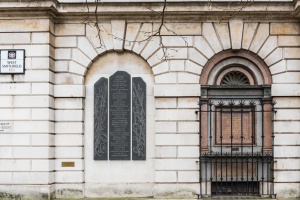 The Peasant's Revolt
In Edward III's dotage, John of Gaunt (Ghent, in modern Belgium) was virtual ruler of England. He continued as regent when Richard II, aged 10, came to the throne in 1377. Four years later a poll tax was declared to finance the continuing war with France. Every person over the age of 15 had to pay one shilling, a large sum in those days. There was tremendous uproar amongst the peasantry. This, combined with continuing efforts by landowners to re-introduce servility of the working classes on the land, led to the Peasant's Revolt.

The leaders of the peasants were John Ball, an itinerant priest, Jack Straw, and Wat Tyler. The revolt is sometimes called Wat Tyler's Rebellion. They led a mob of up to 100,000 people to London, where the crowd went on a rampage of destruction, murdered the Archbishop of Canterbury, and burned John of Gaunt's Savoy Palace.

The End of the Revolt
Eventually, they forced a meeting with the young king in a field near Mile End. Things began amicably enough, but Wat Tyler grew abusive and the Lord Mayor of London drew his sword and killed him.

At this point Richard, then only 14, showed great courage, shouting to the peasants to follow him. He led them off, calmed them down with promises of reforms, and convinced them to disperse to their homes. His promises were immediately revoked by his council of advisors, and the leaders of the revolt were hanged.

In 1399 Henry Bolingbroke, the exiled son of John of Gaunt, landed with an invasion force while Richard was in Ireland. He defeated Richard in battle, took him prisoner, and probably had him murdered. Henry's claim to the throne was poor. His right to rule was usurpation approved by Parliament and public opinion.

Henry IV (1399-1413) had a reign notable mainly for a series of rebellions and invasions in Wales, Scotland, France, and northern England. He was followed by his son, Henry V (1413-22), whose short reign was enlivened by attacks on the Lollard heresy which drove it underground at last. He also resurrected claims to the throne of France itself. After spectacular success at the Battle of Agincourt (1415), Henry married Katherine, daughter of the mad Charles VI of France. Henry died young, leaving the nine-month-old Henry VI (1422-61) to inherit the throne.

Related:
Back: Edward II and Edward III
Next: The Wars of the Roses
Also see "Medieval London" in our "London History" guide.