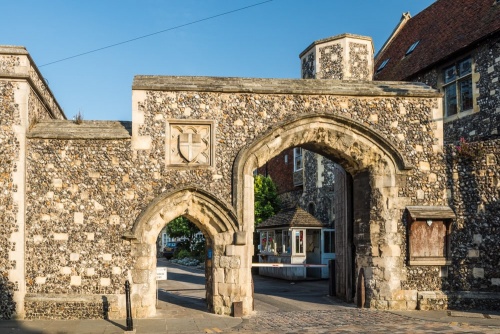 King's School can make a good claim to be the oldest school in Britain. There was almost certainly a school established by St Augustine shortly after his arrival in Kent in AD 597. Initially, that school would have served primarily to train priests, but by the late 7th century the school had attained a reputation for learning that drew scholars from across Britain.

In 1538 Henry VIII dissolved the abbey of St Augustine and Christ Church priory at Canterbury Cathedral. But in 1541 Henry established a new school, housed in many of the former monastic buildings surrounding the cathedral.

Most of these school buildings are grouped around Green Court, within the cathedral precincts, but over time the school has taken over other historic buildings in the city.

Among these are Fyndon Gate, the grand 14th-century gatehouse of St Augustine's Abbey. Near the main school buildings around Green Court is the Norman Staircase, a superb 12th century covered stair, which originally led to a hostel for poor pilgrims.

Among the famous students who have attended King's School over the years are William Harvey, W. Somerset Maugham, Hugh Walpole, Christopher Marlowe, and John Tradescant.

More self catering near King's School >>