The Washingtons of Sulgrave Manor 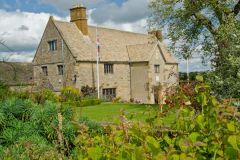 Lawrence Washington came from Watton, in Lancashire, and began his rise to wealth and prominence in the employ of Sir William Parr, the uncle of Catherine Parr, sixth and final wife of Henry VIII. In 1529 Washington, whose family came from Wessington in County Durham, moved to Northamptonshire, where Sir William had business interests.
Washington’s cousin John Spencer of Althorp was at that time making a very good living in the burgeoning wool trade, and Washington was convinced that he should do the same. He left Parr’s employ and set himself up as a wool merchant.

At roughly the same time Washington married Elizabeth Gough, a well-to-do widow. Washington’s new venture flourished so quickly that by 1532 he was elected mayor of Northampton, a post he would fill again in 1545. When Elizabeth died in childbirth Lawrence remarried, this time to Amy Tomson, who was herself twice-widowed. Tomson was the daughter of Robert Pargiter of Greatworth, whose estates bordered Sulgrave. She was to have 11 children with Lawrence, seven daughters and four boys.

When the Abbey of St Andrew was dissolved Washington was able to purchase Sulgrave from the crown, at a cost of £324 14s 10d. At that time there was no manor house on the property, but Lawrence soon changed that. He built a goodly manor in the Elizabethan long house style. It is the core of that long house which stands today as the basis of Sulgrave Manor. The manor was not by any stretch a stately home or grand country house; it was rather the comfortable country house of a wealthy merchant.

Sulgrave Manor was finished in 1560, and Lawrence Washington lived there until his death in 1584. Lawrence’s eldest son Robert inherited the estate and lived at Sulgrave until his death in 1619. His second son, Lawrence, rose to become Registrar of the Court of Chancery in London. However, Robert gave the ownership of the property to his own son Lawrence before his death, and Lawrence, in turn sold it to his cousin Lawrence Makepiece.

So it was that after Robert’s death Lawrence Makepiece took up residence, and stayed at Sulgrave until 1659. After his death the house eventually passed to the Hodges family, and it was John Hodges who extended and rebuilt the manor to give it the shape we can see today. The Hodges remained owners until 1840, but by that time the house had suffered from neglect and was showing signs of decay.

The house passed through several hands until 1914, when it came on the market once more. That year marked the centenary of the Treaty of Ghent (1814) which marked the end of the War of 1812 between Britain and the US. To celebrate the centenary of peace between the nations a public subscription was instituted in Britain to purchase and restore Sulgrave Manor. £12,000 was raised, and the manor purchased, but before work could be commenced the First World War intervened. After the war further public funds were raised and the restoration begun under the aegis of a new charity, the Sulgrave Manor Board, the body which still oversees the estate as a public charity. The future of the manor was assured when the National Society of the Colonial Dames of America raised $112,000 to endow Sulgrave Manor in perpetuity.

But what of the Washingtons? Lawrence, son of Robert, had a son, also named Lawrence, who became a clergyman. During the Civil War the Washingtons supported the Royalist cause. One of the Rev. Washington’s brothers, Thomas, was page to King Charles. Another, Sir William, was brother-in-law to the Duke of Buckingham, King Charles’s powerful favourite. Another brother, Sir John Washington, was a staunch supporter of the king, and Sir John’s son, Colonel Henry Washington, was in charge of the royal forces holding Worcester.

In 1643 Rev. Washington was expelled from his living in Purleigh, Essex, and after the Civil War resulted in clear victory for Parliament, the fortunes of the strongly Royalist Washington’s dipped. So it was no surprise that John Washington decided to emigrate to the Americas. In 1656 John left for Virginia, where the family settled permanently. John’s great-grandson, George, later to become the first President of the United States, was born in 1732.