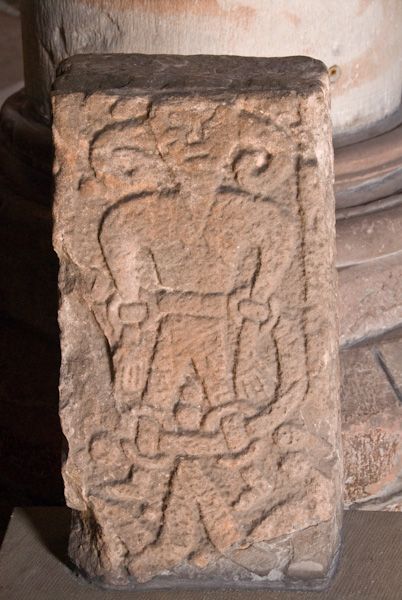 The Loki Stone is an 8th century carved representation of the Norse God Loki, bound and chained. It is one of only two known carvings of this type in Europe, and the only one in Britain. We do not know how the stone came to be in Kirkby Stephen, but it serves to remind us of the Norse influence in this region during prior to the Norman invasion of 1066.
We do not know where the stone was originally located. It has been moved several times over the centuries, and for many years it sat amongst a collection of old gravestones outside the east end of St Stephen's church, open to the elements. Thankfully, it has now found a home inside the church, immediately opposite the south door, where it can be instantly seen by visitors on entering.

Who is Loki?
Loki Laufeyjarson is a Norse (Viking) God, and an important figure in Norse mythology. Loki, the son of the giants FÃ¡rbauti and Laufey, is a trickster, a joker and maker of mischief. One of his tricks went too far and resulted in the death of the son of the god Odin, his foster-brother. For this he was bound in chains and imprisoned underground. In this sense Loki can be regarded as a very rough Norse equivalent of the Christian Satan or the Egyptian Seth. Unlike Satan, however, Loki was not a figure of evil, but a trickster, a master of deceit and deception, known for playing tricks on the gods. He could change shape, becoming a bird, fish, insect, or take on the likeness of any man or woman. People never knew when they might be dealing with Loki, as he could assume any image he chose. Frequently, however, Loki's schemes and tricks go wrong and backfire on Loki.

One of the most famous tales of Loki involves the death of Baldr, the second son of Odin. Baldr was the fairest and most gracious of the gods. Loki made a dart of mistletoe, the only plant that had not sworn an oath to not harm Baldr. He tricked Baldr's blind brother, Hoor to throw the dart at Baldr, killing him. The gods killed Loki's child, Narfi, and used Narfi's entrails to bind Loki to three large stones. Above his head they placed a venomous snake, whose venom was supposed to drip over his head.

The Loki Stone
The stone is about 1 metre high, and rectangular in shape. It has been dated variously between the 8th and 10th centuries, but the most commonly accepted date is sometime in the 8th century. One aspect of the carving that I've not seen discussed anywhere is that it continues over the top of the stone. That is, the figure of Loki is on the surface facing you as you view the stone, yet the carving continues over onto the top of the stone, as if the vertical surface was not large enough to convey all that the sculptor wished to show. The sides of the stone are carved with a simple interlaced geometric pattern.