HERITAGE HIGHLIGHTS:   The Loki Stone, carved with the figure of the Norse God Loki 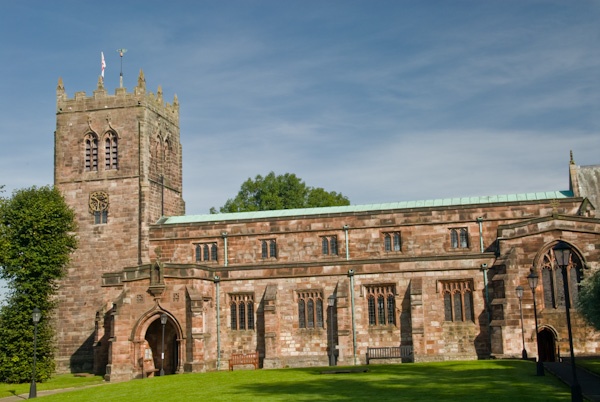 This attractive church of red sandstone is the second largest in Cumbria (after Kendal) and is referred to locally as the Cathedral of the Dales. The first church on this spot was built during the late Saxon period. This was replaced by a Norman church in 1170, and by the current building around 1220.

The most interesting feature of Kirkby Stephen church is the 8th century Loki Stone, a carved representation of the Norse God, Loki, bound in chains. This is one of only two such carvings in all of Europe and a reminder of the Norse influence in the north of England.

The Loki Stone is about one metre high and can be seen immediately in front of the south door on entering the church. The sides of the rectangular stone are incised with an intricate scrollwork pattern.

Also within the church is a display case exhibiting several local artefacts of interest, among which is a tusk of what is thought to be the last wild boar to be killed in England. The boar was killed by Sir Richard Musgrave (d. 1464) on Wild Boar Fell, and the tusk was discovered inside his tomb in the Hartley Chapel when the tomb was opened in the 19th century.

Several members of the Hartley and Musgrave families have memorials in the chapel, including that of Sir Andrew de Harcla, who became the first Earl of Carlisle in the early 14th century.

The story of Sir Andrew is a tragic one. He rose to become Warden of the Marches, and in this role, he was responsible for carrying out peace negotiations with Robert the Bruce on behalf of Edward II. The terms of the peace treaty were erroneously interpreted by Edward as treasonous, and Sir Andrew was thrown into Carlisle Castle without trial, where he was cruelly executed in 1323.

Sir Andrew's estates were purchased by Sir Thomas de Musgrave (d. 1376) whose tomb can be seen in the chapel near that of his descendant, Sir Richard, of boar fame. When Sir Richard's tomb was opened in 1847 and the boar tusk found, the remains of Sir Andrew de Harcla were also discovered within the tomb. The tomb of Sir Richard's grandson (d. 1464), also named Sir Richard, can be found under the carved arch near the altar.

The Wharton Chapel contains further historic monuments to the Whartons of Lammerside and Wharton Hall. Most notable are the empty tombs of Thomas, 1st Lord Wharton (d. 1568) flanked by his first wife, Eleanor, and his second wife, Anne. Lord Wharton was awarded his barony after his victorious conduct at the Battle of Solway Moss, and he purchased the Manor of Kirkby Stephen in 1546.

Lord Wharton was responsible for founding the grammar school here in 1566. He is also, less fondly, remembered for destroying the village of Wharton because he thought it ruined the view from his manor.

The church is approached through a lovely cloister off the market square, built in 1810 as a gift of a local businessman.

And finally, a word about the dedication of Kirkby Stephen church; it is not, as has been sometimes reported, dedicated to St Stephen. Indeed, there is no known dedication, though at one time it may have been dedicated to St John. For that reason, we will simply refer to it as Kirkby Stephen Church. Whatever the name, this lovely old historic building is well worth a visit. 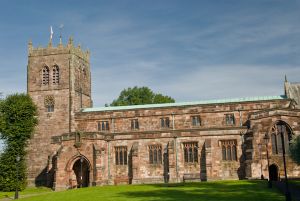