The Lakes of the Lake District 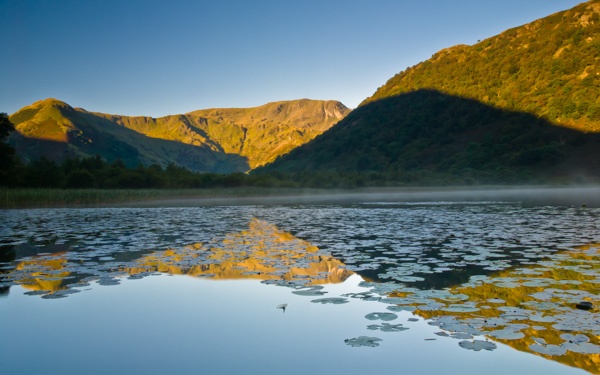 Each of the lakes that give the Lake District its name is unique and offers something a little different to visitors. Here is an overview of the major lakes. This is only a taste; each lake has its own flavour, amenities, and will appeal to visitors with different interests. And there are many more lakes big and small to enjoy.

A lay-by partway up the climb provides wonderful views over the lake. On the eastern shore is Mirehouse, a quiet Georgian house with connections to Lord Tennyson and other Victorian literary figures. Close to Bassenthwaite village is an RSPB bird sanctuary.

Brothers Water
One of the most secluded and smallest lakes, Brothers Water lies between Ullswater and Ambleside at the foot of Kirkstone Pass. The water is shallow and lily pads cover the shallows, creating a green carpet on the blue waters. 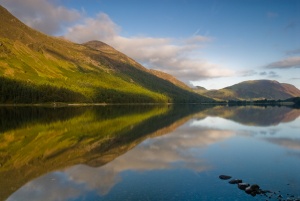 Buttermere
One of most spectacular of the lakes, Buttermere is set in a lovely basin below Grasmoor, a high Lakeland peaks. There are picnic areas overlooking the lake and trails leading into the nearby hills. Head south of Buttermere and you find yourself climbing Honister Pass; the views from the top are absolutely spectacular.

Coniston Water
Lying roughly parallel to Lake Windermere, Coniston Water is famous as the site of Donald Campbell's successful attempts to break the world speed record. Campbell's final record attempt led to his untimely death, and the story of Campbell's Bluebird is just one of the fascinating bits of local history you will learn about if you take one of the steam gondola trips that leave from Coniston pier.

Across the lake from Coniston village is Brantwood, the home of Victorian author John Ruskin. The Brantwood estate is full of opportunities to walk and enjoy the outdoors. Coniston itself caters to those wishing to enjoy outdoor activities as well and offers a good range of accommodation.

Crummock Water
Just north of the smaller Buttermere, Crummock Water lies at the foot of Grasmoor peak. The road along the shores of the lake provides wonderful views of the waters and surrounding steep-sided hills. To the west of Crummock Water is Scale Force, one of the most attractive waterfalls in the region.

Derwentwater
One of the most 'developed' of the lakes, Derwentwater offers some of the best boating and water sport opportunities, with numerous marinas and boat hire companies serving visitors. The major destination on Derwentwater is Keswick, at the north end of the lake. On the eastern shore is the Bowder Stone, a fascinating natural site, where a huge boulder is tipped up on one corner in a seemingly precarious state of balance.

Take the Watendlath road to reach a viewpoint giving superb views over the lake and surrounding hills. To the south, follow the River Derwent into Borrowdale, a narrow valley with access to some of the best hillwalking routes in the region.

Ennerdale Water
Located at the extreme western edge of the Lake District National Park, Ennerdale is one of the most remote lakes but also one of the prettiest. Take the minor road that leads along the northern shore of Ennerdale to Ennerdale Head, a good jumping-off place for some of the region's finest walks. 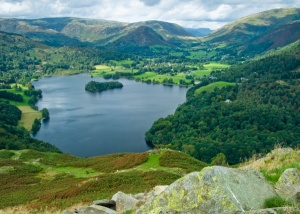 Grasmere
A small lake just west of Rydal Water. Grasmere village is home to Dove Cottage, where the poet William Wordsworth lived. Wordsworth and his wife Mary are buried in St Oswald's churchyard. A parking lot at the eastern end of the lake provides access to a lovely walk along the shore.

Rydal Water
One of the smaller lakes, Rydal Water is located just outside Grasmere at the foot of Loughrigg Fell. At the eastern end is Rydal Mount, the family home of poet William Wordsworth for 37 years.

Thirlmere
Thirlmere is a man-made reservoir created to supply water to Manchester. To make the lake the outflow from a small natural lake was dammed and the valley flooded, submerging two villages. Only the church of Wythburn village survives. A popular footpath leaves from the National Trust car park halfway up the east shore towards the peak of Helvellyn.

Ullswater
The major lake in the north-east of the National park, Ullswater is a gateway to the region for visitors departing the A70(M) at Penrith. Turn left at Rheged and you find yourself on a twisting, winding road that leads past the gates of Dalemain, a lovely Georgian stately home. In a few miles, you catch your first glimpse of water, and for the next 10 miles the road hugs the northwestern shore of Ullswater.

There are several parking places with small beaches, but if you carry on to the southern end of the lake you reach Glenridding. This pretty village is home to the biggest visitor attraction; the Ullswater Steamer. This steam-driven boat plies the waters of Ullswater in summer, but if you don't fancy a trip by steam there are plenty of hire boats available for day or short term rental.

Wast Water is often described as 'brooding', or 'moody'; I have never found it so. If you are lucky enough to be here as the sun goes down on a long summer evening, you will agree it is one of the most beautiful spots in the UK.

Despite its location to the west of the major tourist areas, Wast Water can be busy on fine days, and especially so at the eastern end, where large numbers of walkers come to ascend Scafell Pike, the highest mountain in England.

Windermere
The largest Lake in the Lake District, and, indeed, in all of England. The village of Windermere is the tourism capital of the South Lakes, with accommodation and a variety of outdoor activities. Steamers ply the lake year-round, and there are facilities for boating and water sports, museums, gardens, and family attractions. 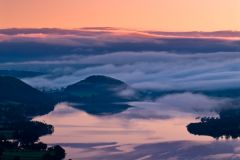 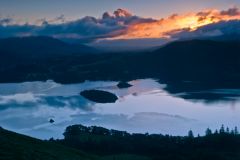 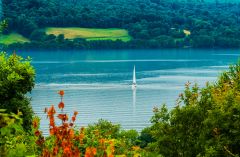 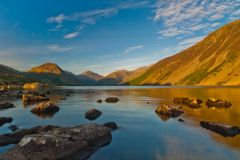 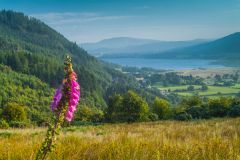