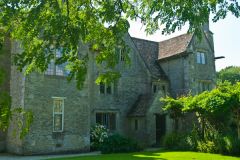 Kelmscott Manor is laid out in a rough T shape, with a protruding wing at the bottom. You enter through the east porch, which gives onto a Screens Passage, a narrow hallway that leads directly through the house to a rear courtyard and brewhouse.
To the right off the Screens Passage is the Hall, with its original 17th century fireplace, and several pieces of oak furniture that were in the house in 1871 when William Morris took up residence. The walls are hung with Strawberry Thief chintz, which has been here since 1896. There are also wall hangings designed by Morris for Red House, his London home.

The Hall gives onto a screens passage leading to the North Hall. On the wall of this chamber is Morris's first attempt at the 'Cabbage and Vine' tapestry that was to prove so successful for him. The most striking piece of furniture is a settle made from ebonised wood, which boasts a cirving back with leather panels painted by Philip Webb.

Beyond the North Hall is the Panelled Room, with a fireplace dating to 1670, and 18th century painted wooden panelling. The fireplace has a painted crest of the Turner family, but the most interesting feature is the plain white paint scheme. This unasuming chamber may have set the tone for the late Victorian and early 20th century popularity of white interior designs, through the influence of Morris and Webb. Even the original curtains were white. Within this chamber and the adjoining Closet are paintings illustrating the connection between the Morris family and the artist Dante Gabriel Rosetti. There are several portraits and sketches of Janey Morris by Rosetti, including several studies he used for his design of the altarpiece at Llandaff Cathedral. The large painting in the Closet, Blue Silk Dress (completed 1868), is one of Rosetti's best works, and shows Janey Morris in a sumptuous blue gown that she made herself. There are also several gorgeous pastel drawings by Rosetti of the Morris children, Jenny and May.

The Green Room is decorated with Kennet chintz, an 1883 Morris design. On display are two wood printing blocks used by Morris to implement the Kennet design. In one corner is an embroidered wool hanging entitled If I Can. This piece, created in 1857, was one of Morris's first attempts at textile making, and represents a landmark in the development of the Morris style. Also on display are a series of tiles designed by Edward Burne-Jones to illustrate heroines from Chaucer's Legend of Goode Women.

A 17th century staircase leads up to three first floor rooms. On one side is Mrs Morris's Bedroom, within which is the four-poster bed in which William Morris was born at his parent's house in Walthamstow in 1834. The satin and silk cover on the bed was worked by May Morris, and won a prize at the Royal Society of Needlework in 1900.

Across the landing is William Morris's Bedroom, also with a four-poster bed, this time from the early 17th century. The striking valence that surrounds the bed was embroidered by May Morris with the help of Lily, sister of poet WB Yeats. The text on the valence is William Morris's poem entitled, apropriately enough, 'For the bed at Kelmscott'. The walls are hung with lovely artwork, but the most impressive by far is a simple drawing by Charles Fairfax-Murray showing William Morris on his death-bed. This sensitive drawing, one of four made by Murray at Morris's bedside, was lost for many years before being discovered in the effects of American Ney MacMinn on a barge in the River Seine!

The final first floor room is the Tapestry Room, a large chamber hung with 17th century Brussels and Antwerp tapestries. On the wall is a 1556 painting by Mathias Knutsen, left by Rosetti. On a table is Rosetti's well-used paintbox, and nearby is an example of the much-copied 'Morris Chair', an adjustable armchair that proved to be one of the most successful products created by Morris and Company.

A peculiar split stair leads up to the Attic, where there are a pair of small bedrooms, used by May and Jenny Morris. Part of the attic is given over to a display of Morris textiles, carpets, hangings , and curtains. Among the designs on display are some of Morris's best known works, including Cabbage and Vines, If I Can, and Sunflower. There is also a selection of needlework by May Morris.

The final chamber in the house is the Kitchen, which features several medieval wooden panels.

The entire house interior is crammed with Morris artwork, textiles, designs, and works by his friends, family, and contemporaries. The overall effect is a wonderful impression of the artistic creativity and enormous output that Morris was able to produce during his lifetime, and the influence his work had long after is time.

This ground floor lodge is situated close to the village of Lechlade and can sleep two people in one bedroom.
Sleeps 4