William Morris was one of the most influential voices in Victorian art and architecture, and his influence spread far into the 20th century in the form of the Arts and Crafts Movement that he helped spawn.

Morris was born at Walthamstow, Essex, in 1834. and attended Marlborough School, and later, Exeter College at Oxford University. He had planned to enter the church, but reading the social commentaries of Ruskin and Carlyle (among others) led him to the arts instead. While at Exeter he met the artist Edward Burne-Jones, who was to prove a life-long friend. 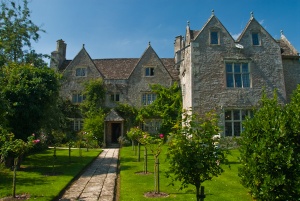 After graduating from Oxford Morris worked in the architectural offices of George Street, who specialised in the Gothic Revival style, but he soon left to pursue painting under the tutelage of Dante Gabriel Rosetti.

In 1859 Morris commissioned Philip Webb, a friend from Street's office, to design him a new home, Red House in Bexley Heath, London. The house was to be built in simple vernacular style using traditional materials.

Morris was annoyed that he could find no good textiles and furniture to decorate his new home, so he decided to design them himself. It was a momentous decision. With friends Burne-Jones, Rosetti, and Webb he formed a small firm, later called Morris and Company, to sell the products they designed.

There was a profound social philosophy behind Morris' designing. He was a committed socialist and medievalist who was horrified by increasing mechanization and mass-production in the arts, and he dreamed of reestablishing the values of traditional craftsmanship and simplicity of design. His slogan was that art should be "by the people, for the people". 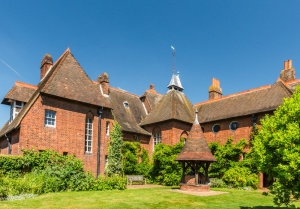 Under Morris' leadership, the company soon made a name for itself as a high-quality producer of such diverse items as stained glass, wallpaper, textiles, and furniture, often with a floral or foliage motif. Unfortunately, the cost of producing these quality items by hand meant that they were too pricey for ordinary people. Only the rich could afford the products of Morris and Company, a fact which caused him great distress.

Morris was also a poet, his The Earthly Paradise (1868-70) meeting with wide success. He translated classical and Icelandic works, and wrote romances such as The Well at the World's End.

He was active in radical politics, notably the Democratic Federation and the Socialist League. In 1890 Morris founded the Kelmscott Press near his last home of Kelmscott Manor in Oxfordshire. He died at Kelmscott in 1896.

The ideals generated by Morris' efforts went far beyond the success of his company, however. They gave rise to a whole new interest in the medieval period, the Arts and Crafts Movement, and even such later 20th-century ideals as Art Nouveau. Moriss was enormously influential in the late Victorian period as a social reformer and his ideas on the value of simplicity and the importance of the individual craftsperson are still with us today.

This cleric and scholar served as tutor to the young Princess Elizabeth, later Elizabeth I


He was secretary to the English ambassador at the court of Charles V, then Edward VI's secretary

His most famous work was Toxophilus (1545)