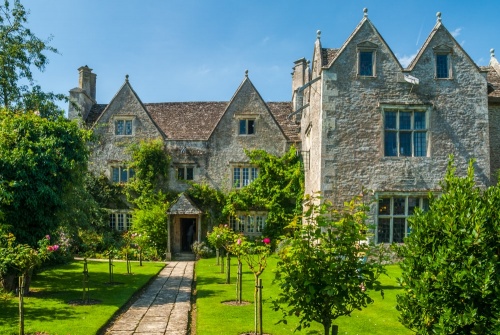 Kelmscott is a beautiful English manor house in an idyllic countryside setting a short stroll from the River Thames. Though it is most famous as the home of Arts and Crafts originator William Morris, Kelmscott has a history that goes back long before the Victorian period.

Kelmscott was built in the late 16th or early 17th century by Thomas Turner, a well-to-do yeoman farmer. The house that Turner built remains almost unaltered at the core of the current building.

The Turner family-owned property at several locations in the Thames Valley, including Filkins and Broadwell. By the 1660s another Thomas Turner was living at Kelmscott. The Turner family fortunes must have taken an upturn, for this latter Thomas was described as a 'gentleman'.

Turner extended the original manor house with the addition of a north-east wing with larger rooms than the old part of the house. This wing contains decoration created by George Turner (d. 1734). After George's death, the house was divided into two apartments, and tenants installed. For most of the next two centuries, the house was rented much of the time.

The most famous of these tenants was William Morris, who came to Kelmscott in 1871. Morris, a founder of the Arts and Crafts movement, used Kelmscott as a country retreat for the final 25 years of his life. After his death, the house passed to his daughter May, and eventually to the ownership of Oxford University. It was finally purchased by the Society of Antiquarians, who restored the house and gardens.

The interior furnishings are one of the most appealing features of Kelmscott. Many of the rooms are exactly as they were when William Morris lived here, and they are filled with samples of Morris's work, including many original tapestries, textiles, wall-hangings, designs, and artwork.

The gardens surrounding the house are much as Morris would have known them, with planting schemes echoing some of Morris's own popular design patterns.

A short stroll from the manor leads to St George's Church, where Morris was buried.

Kelmscott is a wonderful historic house in a delightful setting. Beware the crowds if you visit on a sunny summer day! Admission to the house is by timed ticket, so be sure to allow plenty of time in case you have to wait for admission.

Families with children will appreciate that there is a good children's quiz to keep the younger visitors interested, and there is plenty of space outside for children to run around in. Many families bring a picnic and eat a packed lunch on the banks of the stream that runs beside the manor. 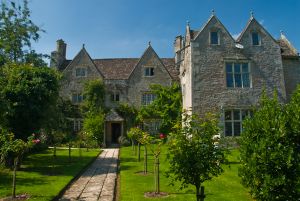 More self catering near Kelmscott Manor >>