HERITAGE HIGHLIGHTS:   Site of the medieval shrine of St Richard of Chichester 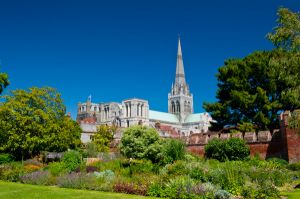 In 1075 Chichester came to prominence with the transfer of the bishop's seat from Selsey, on the coast. Work was begun on the cathedral in 1076 under the command of Bishop Stigand, and was completed in 1108 under Bishop Luffa. The Norman work here is largely 12th century. In the 13th century the wooden roof of the nave was replaced with stone vaulting. A unique feature of Chichester is the freestanding bell tower.
Take a close look at the spire. It is actually a Victorian restoration, and a very successful one at that, visible for miles away.

Interior Highlights
In the south transept are a series of 16th century paintings on boards, performed by Lambert Barnard. A matching set of paintings by Barnard hangs in the north transept. These were commissioned by bishop Robert Sherbourne, whose grand tomb is in the south aisle. Near Bishop Sherbourne's memorial are two very important pieces of 12th century sculpture depicting the raising of Lazarus and the arrival of Christ at Bethany. These sculptures date to the early 12th century and are two of the finest Norman works in existence.

Behind the high altar is the site of the medieval shrine to St Richard of Chichester. St Richard, whose statue stands outside between the west end and the Bell Tower, was Bishop from 1245-1253 and canonised in 1262. The shrine was a popular place of pilgrimage before the Reformation, and has recently regained some of that popularity among modern pilgrims.

In the north transept is a memorial to composer Gustav Holst, and just around the corner in the north aisle is the tomb of Richard Fitzalan (d. 1376), Earl of Arundel and subject of a poem by Philip Larkin.

In recent years peregrine falcons have taken to nesting in the tower, and on our visit hordes of bird watchers and photographers were clustered around the cathedral exterior hoping to catch a glimpse of the falcons.

A short walk from the cathedral brings you to the Bishop's Palace, official residence of the Bishop of Chichester. Though the palace is not open to visitors, you can stroll the Bishop's Palace Gardens, an oasis of greenery and floral splendour. Actually the best views of the cathedral itself can be had from the gardens, and on one side of the garden area you can walk along the old medieval city walls of Chichester.

More self catering near Chichester Cathedral >>