HERITAGE HIGHLIGHTS:   The shrine of Thomas Becket was the most important pilgrimage destination in Britain in the medieval period 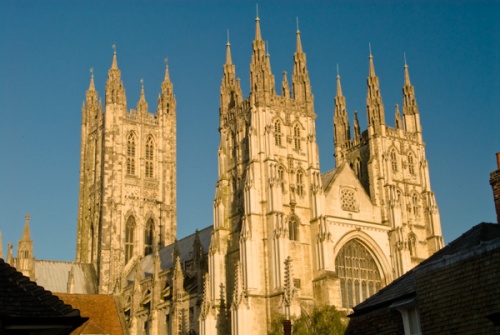 Even if Thomas Becket had chosen somewhere else to earn his martyr's crown, Canterbury would still deserve attention for its role in the spread of Christianity throughout England. It was here that St. Augustine began the conversion of the pagan islanders in 597.

St Augustine built a cathedral church within the old Roman city walls of Canterbury, and he became the first Archbishop of Canterbury. A Christian community grew up around the cathedral, managing the building and its environs. In the 10th century this community formally became a Benedictine monastery. 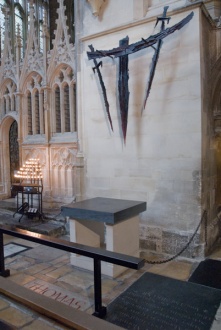 The remains of the original 6th century cathedral established by Augustine lie beneath the nave. Excavation has shown that Augustine's church was built in part on top of a Roman road, presumably to provide a solid foundation.

Little enough remains of the Saxon church, for after the Norman conquest Archbishop Lanfranc rebuilt the cathedral on a more lavish scale. This rebuilding took seven years, from 1070 to 1077. The best surviving parts of this first Norman church are a staircase and the area of the north west transept known as The Martyrdom.

In 1170 Becket met his death in the north transept of the crossing (The Martyrdom) at the hands of four knights seeking to curry favour with Henry II, who had quarrelled with the Archbishop. Immediately after Becket's death miracles began to be reported at his tomb, and when the church suffered a major fire in 1172 it provided an excuse for rebuilding and making the cathedral a fitting shrine for the recent martyr.

The rebuilding was entrusted to William of Sens, who brought with him a mastery of the new French style, which we now call "Gothic". In 1179 William of Sens fell from scaffolding above the high altar and was so badly injured that he was forced to retire and leave the project in the capable hands of his assistant, a man known to us only as William the Englishman.

Becket's shrine in the Trinity Chapel was finished in 1220, and for another 300 years it was the most popular place of pilgrimage in England (see Chaucer's Canterbury Tales). The Corona was built at the eastern end of the quire as a separate chapel to house a piece of Becket's skull. 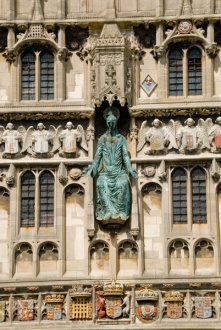 In the 14th century Archbishop Lanfranc's nave was rebuilt by Henry Yevele, called the greatest architect of late medieval England. Yevele (or Yeveley) pushed the nave to the height of the chancel, creating a vast, upward-reaching hall. In 1496 the "Bell Harry" central tower was added. This is the tall tower that can be seen from many miles away.

Henry VIII's men despoiled Becket's tomb during the Dissolution of the Monasteries, carting away 26 wagon loads of valuables and scattering the bones of the saint.

The area where Becket's shrine stood is marked with a candle at the east end of the chancel. Before the candle is a pinkish stone set into the floor, which bears the marks of thousands of pilgrims who knelt there to worship at Becket's shrine. The impact of the sheer number of medieval pilgrims on the cathedral cannot be overstated; the staircase leading up to the south ambulatory - known as Trinity Stair - is worn into undulating waves by the passage of their feet and knees.

For more see our Photo Gallery of Canterbury Cathedral

Key dates in the building of the cathedral

c597 Augustine establishes his cathedral, possibly using part of an existing Romano-Christian building
740-760 Archbishop Cuthbert builds a baptistry
941-958 Oda rebuilt the earlier church and extended the nave
1013 -1038 Lyfing and Aethelnoth add a western apse
1070-1077 Lanfranc completely rebuilt the Saxon cathedral in Norman style
1093-1109 St. Anselm pulls down much of Lanfranc's work and extends the Quire further east
1174 William of Sens rebuilt the Quire. His successor William the Englishman built Trinity Chapel and the Corona to hold the shrine of St Thomas Becket
1390-1410 Henry Yevele, under Prior Thomas Chillenden, rebuilds the nave in Perpendicular style
1494-1504 The central tower is demolished and rebuilt

More self catering near Canterbury Cathedral >>