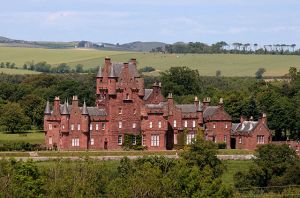 Ayton Castle
Ayton Castle is a red sandstone Victorian castle built in 1846 on a wooded cliff. The castle is an excellent example of the Scottish baronial style of architecture popularised by Sir Walter Scott. Recently restored and still a family home. Open for groups and special events.
History
Though the house we see today is most definitely a product of a romantic Victorian vision, it is based around a genuine medieval tower house.

The original Ayton Castle was a pele tower built by the Home family. It was captured by the English in 1497, and the nearby parish church was used to negotiate the Treaty of Ayton later that year.

The medieval tower was rebuilt as a mansion in neo-classical style, but that burned to the ground in 1834. William Mitchell-Innes purchased the Ayton estate and in 1851 he called in architect James Gillespie Graham to design a new mansion in Scottish baronial style, one of only two houses in this style built by Graham. The house was enlarged in the 1860s and again in 1875.

Author Mark Twain (Samuel Clemens) visited Ayton in 1873 and was so taken by the fireplace mantle in the dining room that he bought it and had it sent back to America. It is now in the Mark Twain House & Museum in Hartford, Connecticut.

Within the castle grounds are a 1745 dovecot, and Ayton parish church.

UPDATE:
As I write this the castle is currently closed for renovations, though the owners do say they are planning to reopen to visitors once the renovations are complete, so stay tuned!

More self catering near Ayton Castle >> 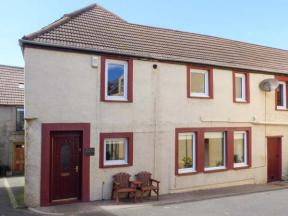 This end-terrace cottage is located in the village of Eyemouth and can sleep five people in three bedrooms.
Sleeps 5 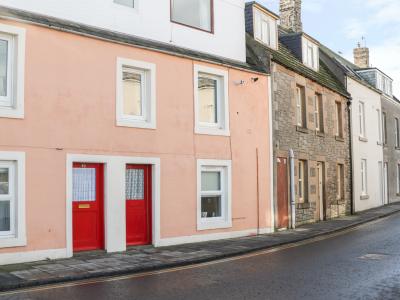 This apartment is located in the village of Eyemouth near St Abbs and can sleep four people in two bedrooms.
Sleeps 4