HERITAGE HIGHLIGHTS:   Once the longest suspension bridge in the world 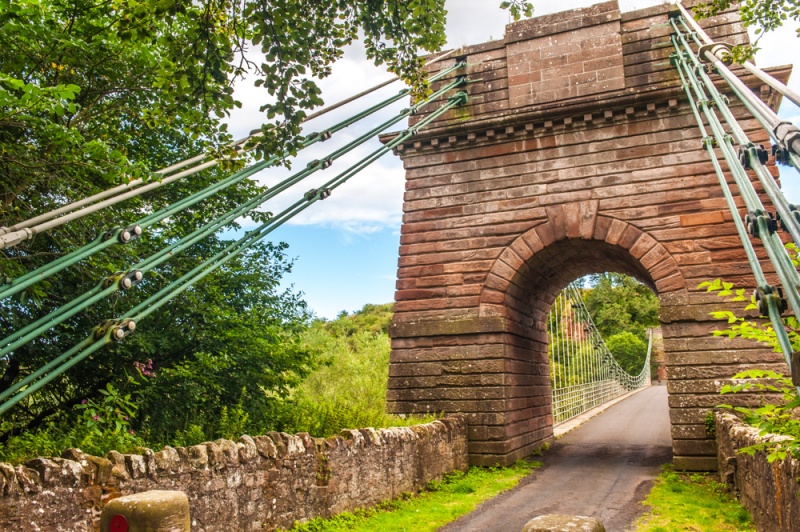 The Union Chain Bridge (Scottish side)

The River Tweed has historically formed a boundary between England to the south and the Scottish Borders to the north. Before 1820 the only way to cross the river between Coldstream and Berwick-upon-Tweed, on the coast, was a perilous ford. When the river was high, the crossing was a dangerous undertaking, and more than one life was lost in the attempt.

Yet people made the crossing regularly, for the alternative was an 11 mile round trip to Berwick or an even longer 20 mile trip to Coldstream. The Horncliffe crossing was important, as coal and lime from Northumberland was in heavy demand in Berwickshire for agricultural purposes. The cost of a new bridge was carried by the Berwick and North Durham Turnpike Trust. In 1817 the Trust opted for a revolutionary cable design, which was estimated to cost one-third of an equivalent masonry bridge and was quicker to build.

The designer was Captain Samuel Brown, a retired naval officer. Brown began his engineering career in the Royal Navy, where he designed an experimental wrought iron chain to replace hemp rope used in rigging. The new design was prompted by the loss of several navy ships that had broken free from their hemp ropes. The chain proved much more durable than the traditional rope, and Brown recognised the commercial application of his invention. 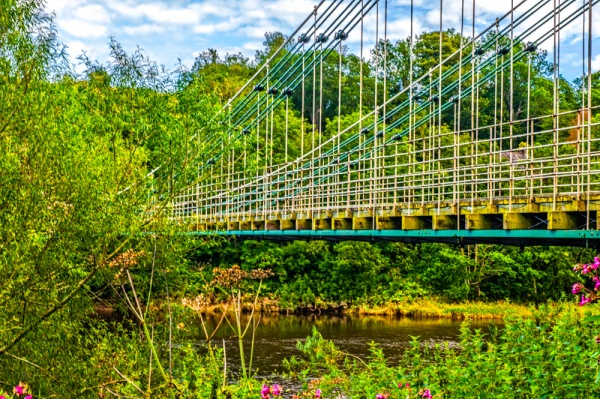 The bridge and the River Tweed from the north

He left the Navy is 1812 and co-founded a company to take advantage of his new technology. The company eventually became Brown Lenox & Co Ltd and made chains and anchors from factories in Pontypridd and Millwall. Brown Lenox & Co supplied rigging chains to the Royal Navy until 1926.

But Brown did more than just manufacture chains, he saw a wider application for his new technology, so in 1813 he designed a prototype suspension bridge supported entirely of chains made of linked sections of iron bar. The design drew attention from such famous engineers as Thomas Telford and John Rennie.

Brown patented his chain design and followed up with a patent for bridge construction using the chain design. 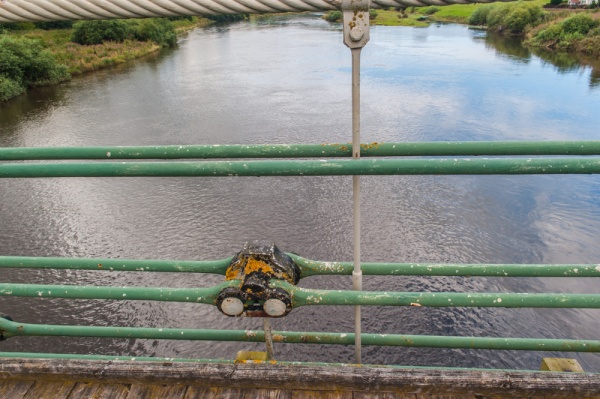 In 1818 Brown agreed to design a new bridge across the River Tweed, linking Horncliffe in Northumberland to Fishwick in Berwickshire. He must have had a few doubts, for immediately before agreeing to design the bridge, a cable-stayed footbridge upstream of the Hornclife site had collapsed.

Brown was convinced of the validity of his design, which for the time was revolutionary. Yet he knew nothing about construction or design of the masonry towers needed at both ends of the suspended bridge, so John Rennie was called in to offer suggestions on that part of the bridge design.

The result was extraordinary by the standards of the time and remains extremely impressive today. The bridge spans 449 feet (137 m), with the actual timber deck spanning 390 feet (120 m). On the English side, it is anchored in a rock outcrop, but on the Scottish side, the chains are suspended from a stone tower.

It is much easier to approach from the Scottish side, where the road runs straight, but on the English side it bends sharply immediately before the bridge. 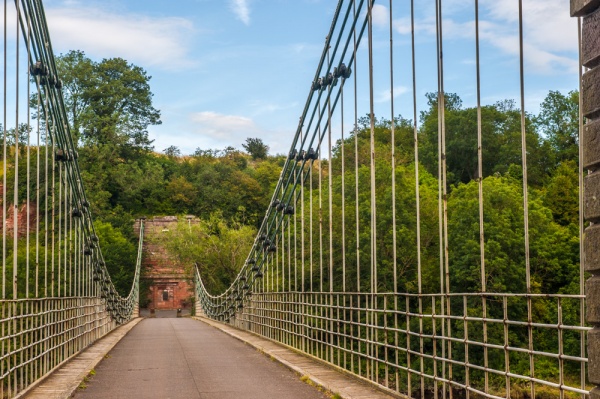 Brown drew on his familiarity with ship design and did not attempt to make the bridge completely solid, but to allow the structure to flex slightly. If you stand on the bridge deck while a vehicle is crossing you can feel the entire structure moving under your feet.

The bridge was begun on 2 August 1819 and cost £6,449. to finish. It opened on 26 June 1820 in a ceremony attended by dignitaries as well as the famous Scottish lighthouse engineer Robert Stevenson. In a dramatic scene, Captain Brown demonstrated the safety of his design by driving a carriage towing a dozen carts across the bridge, with trumpets blaring. Being assured that the bridge was safe, a crowd of some 700 spectators made the crossing.

As for Brown, he went on to design several more suspension bridges, but with only indifferent results. Several were destroyed by storms and his railway bridge across the River Tees proved unsuitable and had to be replaced. If his later career was unspectacular, the influence of his design on the Union Chain Bridge was profound. 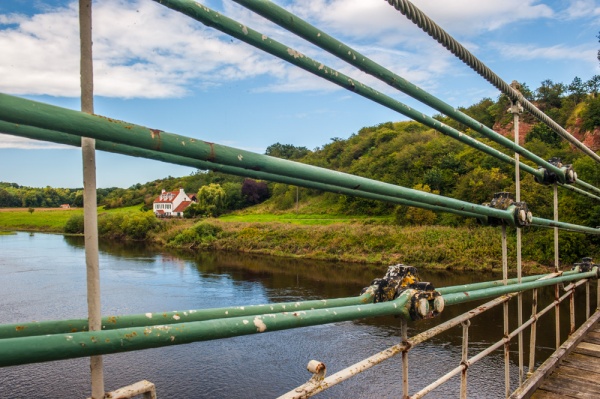 The Union Bridge was not a public service; it was expected to make money. a toll house was set up on the English bank, and tolls were charged until 1883. The toll house was pulled down in 1955 after it was declared unfit for habitation. You can still see its foundations.

After the abolition of turnpike tolls, the bridge passed into the control of the Tweed Bridges Trust, and then to the joint care of the Scottish Borders Council and the Northumberland County Council. The bridge has been strengthened several times, in part because modern vehicles are much heavier than Brown could have anticipated. The chains have been reinforced several times and the bridge deck renewed twice, yet roughly two centuries after it linked England and Scotland the bridge still stands.

In recent years there has been concern that the Council was not maintaining the bridge and closure was a distinct possibility, yet as of this writing, the bridge is still operational. Our family has driven (and walked) across it, though the driving was a bit nerve-wracking as the bollards on each end are extremely close together, with just room for a standard automobile to pass through. The bridge is only wide enough for one vehicle, and for safety reasons only one vehicle is permitted on the deck at a time.

Visiting the bridge is straightforward. You can drive across it in either direction, though remember that only one vehicle at a time is allowed. There is a stopping place on the Scottish side where you can park and explore the bridge on foot. The Union Bridge is only a short distance from the stately home of Paxton House.