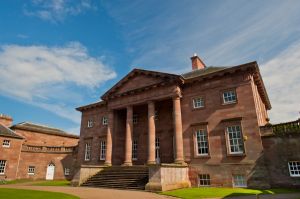 This delightfully elegant mansion, built in 1773, is one of the best examples of Palladian architecture in Britain. The interiors feature one of the best collections in existence of Chippendale furniture, with original bills of sale from the Chippendale works. The art gallery was added in 1811 and houses pictures on loan from the National Gallery of Scotland.

The house was designed by John Adam for Patrick Home. Adam, the brother of the famous Scottish architect Robert Adam, was aided by his other brother James. The young nobleman Home intended the grand new house to be a haven of wedded bliss, where he could bring his intended bride, Sophie de Brandt, a lady in waiting to the wife of Frederick the Great of Prussia.

Though the lady herself was willing, and the Emperor gave his blessing, Patrick's Scottish relatives were horrified by the proposed match. The family opposition prevented the match, and though Home corresponded with Sophie for a dozen years, they never saw each other again.

Heartbroken, Patrick Home eventually married and sold the unfinished house, no more than an empty shell, to his nephew, Ninian Home.

It was Ninian Home who furnished Paxton in grand style, including the wonderful collection of Chippendale furniture. According to the tour guide who escorted us around the house, there are only about 600 original pieces of Chippendale furniture left in the world, and over 50 of them are at Paxton, many of them still in their originally intended room settings.

Home also called in Robert Adam to help complete the interior decoration. Among the finest features are the classical plasterwork designs and original wallpaper, as well as a marvellous collection of fine art and antiques amassed by Patrick Home on his Grand Tour of Europe.

In addition, there are over 70 paintings loaned by the National Gallery of Scotland. Most of these are found in the library, a quite stunning room, full of light, built by Robert Reid.

Though you can explore the grounds and enjoy woodland walks at your leisure, the house can only be viewed by taking one of the regular guided tours. These are excellent, very informative and entertaining. In addition to the main rooms of the house, the tour also takes in a restored Georgian kitchen.

NB. If you visit with younger children make sure to tell them there's an adventure playground at the end of the tour - it worked with our 10-year-old daughter! Children will also enjoy the huge, giant sized armchair in the waiting area.

More self catering near Paxton House >>