The Battle of Culloden 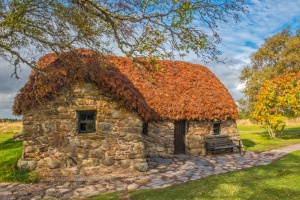 WHO
Jacobite Scots under Prince Charles Stuart (Bonnie Prince Charlie) vs. British troops (composed of both Scots and English) under William, Duke of Cumberland

WHY
Charles Stuart invaded England and attempted to wrest the crown from George I. He was forced to retreat back into Scotland, and despite success at the Battle of Falkirk, to retreat still further into the Highlands to recoup.

THE BATTLE
The Jacobites under Prince Charles attempted a night march to surprise the British army. When it was obvious they could not come close enough in time for a dawn attack, the Jacobites were forced to retreat to their camp at Culloden Moor. Thus the ill-fed and exhausted Jacobite forces were not prepared when Cumberland ordered his men to march on their position.

The Scots suffered badly from a deadly rain of grapeshot poured out by Cumberland's artillery. Their only hope of triumph lay in a quick attack, but by the time Charles Stuart gave the order, the damage was already done.

Despite their inferior numbers, the Jacobites pushed back Cumberland's line in several places, but there was to be no repeat of Prestonpans here. The Scots were savagely repulsed by Cumberland's men, who were under orders to spare no one, even the wounded.

RESULTS
Bonnie Prince Charlie fled Culloden when it was obvious that his cause was lost. The tale of his eventual escape to France makes for romantic reading, but less romantic was the fate of his Scottish allies. They were hunted down and mercilessly killed by Cumberland's men - so mercilessly that Cumberland himself was saddled with the nickname "Butcher Cumberland".

Though the dream of a Jacobite king died slowly, the Battle of Culloden marked the last forlorn hope of the Stuart cause.

You can read more about Culloden Battlefield in our Highlands Travel Guide.