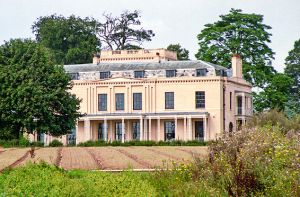 Moggerhanger Park
Moggerhanger is a Grade I listed Georgian building designed by Sir John Sloane, set in peaceful grounds laid out by Humphry Repton in the late 18th century.

In 1792 Godfrey Thornton, Governor of the Bank of England, asked architect Sir John Soane to design a country retreat at Moggerhanger to replace an earlier Georgian house. The house was not completed until 1812, by which time Thornton's son Stephen had inherited. The result of Soane's work is a symmetrical house in classical style, finished with biscuit-brown lime render, a new material at the time.

Soane used an innovative design concept; he painted the window bars dark grey, so they blend into the background, making the windows appear to be dark openings in the walls. Moggerhanger is considered to be the most complete and unaltered example of Soane's work still in existence.

In the 20th century, the house was converted for use as a hospital, but from 1995 it was restored and opened to the public.

The grounds surrounding Moggerhanger House were laid out by the famous 18th-century gardener and architect Humphry Repton. When Repton undertook a new design he would produce a 'Red Book' of sketches, a sort of master plan, to show his wealthy clients. We are fortunate that the Moggerhanger Red Book produced in 1792 survives, as does a second Red Book for 1798.

Near the house, Repton created lawns with carefully arranged trees to offer surprise views of the house. Behind the house are specimen trees, arranged to offer countryside views from within the house. Screened from the house by shrubs is the walled garden and ice house, and further afield is an orchard and woodland, or Pleasure Grounds.

The woods nearest the house have winding trails for the family to exercise and enjoy nature. The grounds, including the Garden Woods, is open daily 10-4 as of this writing and is free to enter.

The house itself is now primarily a hotel, wedding and conference venue, but is open for regular guided tours and for pre-booked groups.

Garden: Originally landscaped by Humphry Repton, the 33 acres of parkland surrounding Moggerhanger House retains many of its features, from the walled gardens to the ice house and woodland walks.

More self catering near Moggerhanger Park >>