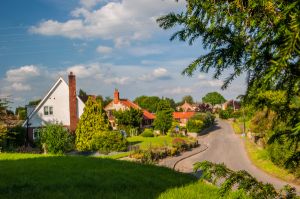 Alkborough is located at the junction of three rivers; the Ouse, Humber, and Trent. A treasure trove for heritage hunters, the village features an 11th-century Norman church in addition to a Roman camp. The camp is named the Countess Close, after Countess Lucy, wife of the Norman Lord Ivo Tailbois.

The earthworks at Countess Close were first identified as a Roman camp by the 18th-century antiquarian, William Stukeley. However, modern excavations suggest that though there is a ladder-shaped Roman settlement extending away from Countess Close, the Close earthworks are likely the remains of a medieval fortified manor house.

Lying almost beside the earthworks is an intriguing turf maze called Julian's Bower, one of the last original turf mazes in the country. The maze is 13 metres in diameter and is thought to date to the Roman period. Technically, it is not a maze at all, but a labyrinth. Even the date is subject to debate; some historians deem it to be Roman, others think it is medieval.

From the maze, there are excellent views over a nature reserve on the Alkborough Flats. The flats were used as a bombing range during WWII, with observation posts on the clifftop.

The church of Saint John the Baptist dates to the mid 11th century, with a 12th-century nave arcade. In the church porch is a mosaic in the shape of Julian's Bower maze. The tower arch is made partly with reused Roman stones.

Alkborough is mentioned in the Domesday Book when it was called 'Alchebarge'. Sometime before 1052 a Benedictine priory was established here by Thorold, High Sheriff of Lincoln county. The priory stood near the present-day College Farm, but no traces now remain.

Just outside the village is Walcot Hall, a Georgian mansion built in 1726 and set in 22 acres of grounds. The Hall was built by Nicholas Denman, Alderman and then Mayor of Hull, on the site of an earlier house dating to 1629. Bronze Age artefacts were unearthed in the grounds in 1920, and a hoard of Roman coins has also been discovered near the house. The Hall is now used primarily as a venue for weddings. 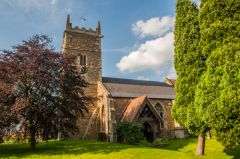 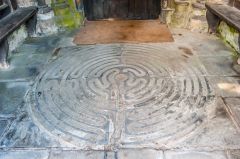 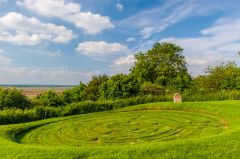 More self catering near Alkborough >>

More bed and breakfasts near Alkborough >>