HERITAGE HIGHLIGHTS:   One of the finest Elizabethan mansions in England 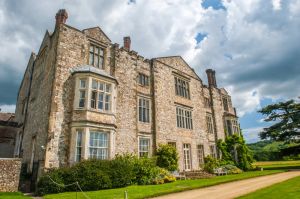 Parham is an Elizabethan H-shaped house featuring its original rooms and furnishings, as well as Jacobean additions. The most interesting feature at Parham is the Long Gallery, which stretches fully 160 feet. Outside the house is a lovely 4-acre walled garden.

The Monastery of Westminster held lands at Parham during the Middle Ages, but when Henry VIII dissolved the monastery in 1540 he granted the estate to Robert Palmer, a London mercer. It was Palmer's grandson, Sir William Palmer, who created the house we see today, beginning in 1577.

The house took only 6 years to build, and was constructed in fairly typical Elizabethan style, with an H-plan layout centred on a great hall. The material is an intriguing mix of local stone and timber, with the addition of imported Caen stone and timber from the Baltic.

After the Palmer family sold the estate in 1601 Parham passed through numerous hands until 1922 when the estate was purchased by the Hon. Clive Pearson and his wife Alicia.

The Pearsons were responsible for restoring and renovating the crumbling manor house and filling the interior with a wonderful collection of period furniture and works of art. Many of the artefacts collected by the Pearsons were purchased because they had originally been at Parham or had some connection with the house.

During WWII Parham was used to house 30 children evacuated from Peckham, London, and a fascinating exhibition off the Long Gallery tells the story of the children and their lives at Parham. 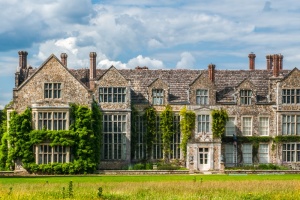 Aside from the extraordinary Long Gallery, one of the highlights of the house is the Elizabethan Great Hall, where you will find one of the most intriguing paintings in the Parham collection, a portrait of Henry Frederick, Prince of Wales, on horseback.

What is so fascinating about this portrait - apart from the exquisite costume worn by the young prince - is that it originally showed the Prince's horse being led by a winged figure of Time. But when the Prince died tragically in 1612 the figure of Time was painted out, replaced by a woodland scene.

It was only in 1985 that x-rays revealed the original design, which was then carefully restored so that we can now see the original work as it was painted.

Other chambers on view include the Great Parlour, hung with beautiful 17th century portraits including a magnificent full-length likeness thought to be Elizabeth of Bohemia, the 'Winter Queen'.

Contrast this room with the Saloon, an elegant chamber remodelled in exquisite Georgian style by Cecil Bishopp in 1790. Upstairs are a range of bedchambers, including the Great Chamber, which boasts wonderful plasterwork and a Tudor bed that probably came from the court of Henry VIII.

Do take time to visit the medieval parish church, located just a short stroll from the main house, standing in isolated splendour in the grounds. And don't miss Veronica's Maze, a turf and brick maze built for the Year of the Maze in 1991. Though it looks easy, it isn't; our determined family took at least 15 minutes to reach the centre.

An absolutely delightful historic house, with fantastic artwork and glorious gardens. We loved visiting Parham and would happily return. 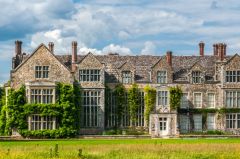 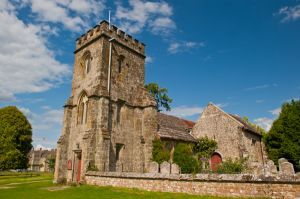 More self catering near Parham House and Gardens >>

More bed and breakfasts near Parham House and Gardens >>