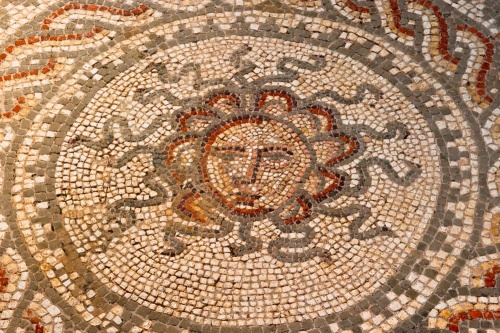 In its heyday the Roman villa at Bignor took in 70 buildings spread out over 4 acres. Today, the site museum preserves some of the best mosaics in England. From Bignor you can trace the route of Stane Street, the great Roman road linking Chichester with London.

On 18 July, 1811 farmer George Tupper was ploughing a field at Bignor, West Sussex, when his plough struck a stone embedded in the earth. Tupper had unearthed part of a water basin associated with a 2nd century Roman villa.

When he cleared away the soil beside the basin, he uncovered part of one of the most famous mosaics in Britain; a likeness of Ganymede that now forms the centrepiece of 'Room 5' at Bignor. The Roman finds at Bignor made it an instant hit with tourists, and the site was officially opened to visitors in 1814.

Subsequent excavations revealed that the site was probably occupied from the late 1st century, but the earliest existing farm buildings date from about 190 AD. Sometime around the middle of the 3rd century the earlier timber buildings were replaced by stone.

This first phase consisted of only 4 rooms, but this was later extended with the addition of a hypocaust heating system, a portico, wings, and another chamber. Over the next several centuries Bignor was enlarged to create a courtyard villa with outbuildings and gardens, indicating that it was a place of great wealth and status. 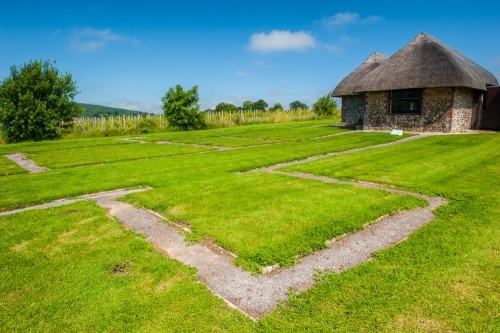 The most impressive feature of Bignor are the mosaics. Perhaps the most famous is the original Ganymede mosaic uncovered by George Tupper. This room is centred on a water basin surrounded by six figures of dancing girls, above which is a large figure of the youthful Ganymede being carried of by an eagle to become cup-bearer to the Gods.

In a separate small building is a marvellous mosaic of Venus and the Gladiators. The fascinating part of this mosaic is a horizontal strip, like a cartoon sequence, showing two gladiators fighting under the watchful gaze of an umpire. The centre of this chamber has collapsed, so you can clearly see the underfloor hypocaust heating system.

To the south of the courtyard is a chamber with a famous mosaic depicting the four seasons, but the only season to survive intact is the likeness of Winter.

Another famous mosaic is that of a dolphin. This is remarkable not for the dolphin itself, but for the fact that the mosaic appears to have been signed by the artist. Finally, there is the separate bath house at the bottom of the sloping site. Here the mosaic design is based around a quite stunning likeness of Medusa, her hair a mass of writhing serpents.

I didn't know what to expect when we visited Bignor, but gosh was I ever impressed! The site is laid out on a sloping hillside, set in a lovely wooded area. Its so peaceful that you could almost imagine yourself transported back in time to the Roman period!

The main mosaics are protected by a series of linked thatched buildings, and outside these buildings are further foundation walls showing the extent of the villa complex. The museum area was small, but interesting, with objects found on the site, including a couple of children's skeletons. 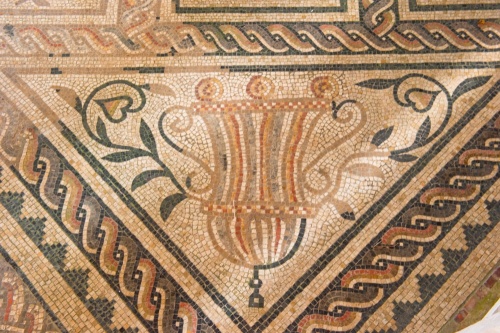 The very friendly guide told us that Romans did not consider infants to be fully fledged people, so when they died young they were not buried in a proper burial ground away from habitation, but wherever a spot could be found - in this case close to the villa, where they were discovered during excavation of the mosaics.

My gosh, the mosaics are superb; some of the craftsmanship is utterly amazing. Though not so large a collection as the more famous collection at Fishbourne, the Bignor mosaics are every bit as good. I was particularly impressed by the head of Medusa in the bath house.

One fascinating feature was the Roman hopscotch area, which was quite similar in layout to our modern game, but, oh, goodness, the rules were very hard! Beside the hopscotch area was a Roman style turf maze laid out on the lawn. 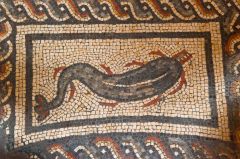 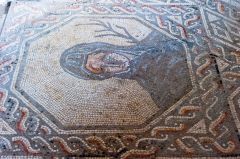 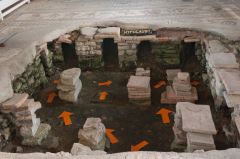 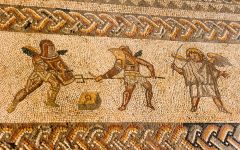 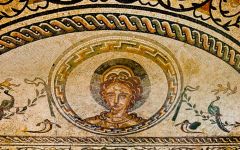 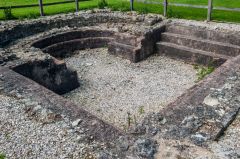 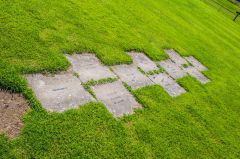 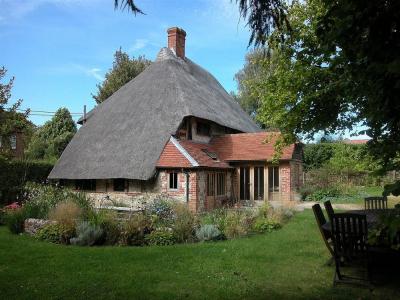