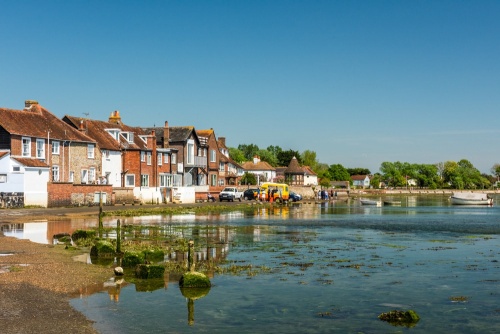 Bosham is a delightful village situated on an arm of Chichester Harbour. Bosham has a long history; it is thought that it was one of the first sites in Sussex where St Wilfrid preached, around the year AD 681.

Wilfrid was born around AD 633 in Northumbria to a noble family. He studied at Lindisfarne, Canterbury, and abroad in Gaul and Rome before returning to Northumbria and becoming the abbot of Ripon. He rose to prominence at the Synod of Whitby in AD 664 when he played a leading role in the triumph of Roman worship over the Celtic tradition.

He served as Archbishop of Canterbury and Bishop of Northumbria, but he quarrelled with Ecgfrith, the Northumbrian king, and was exiled. He spent his exile in Selsey, about seven miles south of Bosham, where he converted the pagan inhabitants of Sussex to Christianity. Holy Trinity Church in Bosham is a reminder of St Wilfrid's influence in this area.

We do not know exactly when the first church was established at Bosham but it must have been during or shortly after Wilfrid's time. 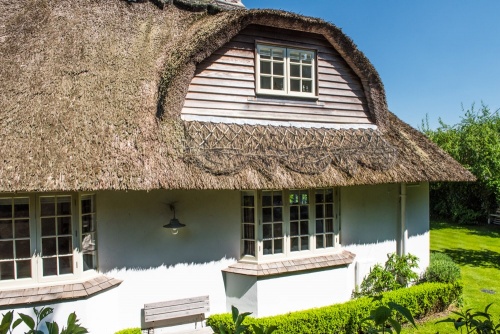 A picturesque thatched cottage near the church

Bosham remained a place of considerable importance throughout the Saxon period.

It was at Bosham that King Canute, tongue in cheek, ordered the waves to cease their movement. Canute was not so vain as to think he could actually command the tide; he was making a point to the courtiers who continually tried to curry favour by flattering him.

Though the tale of Canute and the waves might elicit a smile, Bosham was not a happy place for the king, for it was here that his 8-year-old daughter tragically drowned in the millstream that runs directly outside the churchyard wall. The child was buried inside Holy Trinity Church, her grave marked by a simple stone plaque under the 11th-century chancel arch.

One of Canute's successors, Harold, set sail from Bosham in 1064 on the voyage which was to eventually cost him his kingdom, after a storm cast him into the hands of William of Normandy. William forced Harold to swear on a Bible that he would allow William to take the throne of England after Edward the Confessor died. William probably didn't expect Harold to honour a vow made under duress, but he used the promise as the pretext for his successful invasion of England in 1066.

The Bayeux Tapestry, recording the story of William's triumph, depicts King Harold visiting Bosham church before setting sail. The Tapestry clearly shows the distinctive high chancel arch that you can still see today inside the church. On the wall is a replica of the section of the Bayeux Tapestry showing Harold entering the church. 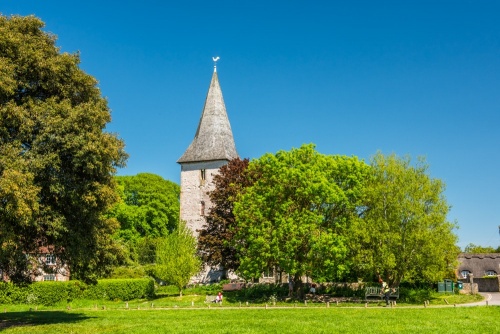 A view King Canute would recognise

If you take the bridge over the millstream from the churchyard gate you come to Bosham Quay Meadow, a wide green space that was given to the National Trust in 1934 by the Earl of Iveagh, who wanted to preserve the idyllic views of the harbour and church from development.

From the meadow you can stroll around Bosham Quay and watch the local sailing club launch their boats, following in the footsteps of King Harold as they sail from the picturesque harbour. If you walk along the Quay you come to Shore Road, which runs along the edge of the harbour.

Be careful! Shore Road is only accessible at low tide, and when the tide comes in it completely submerges the road. As you walk you'll notice that all the cottages lining the shore have steps facing the harbour, so that boats can be moored alongside at high tide.

Bosham is famous for the sometimes comical mishaps of visitors who decide to park by the shore at low tide, only to return and find their car floating away or at the least submerged under the water.

Today, Bosham remains a popular boating centre, and it retains many charming 17th and 18th-century buildings in the narrow, winding streets and alleys that lead to the harbour. The manor of Bosham House, which may stand on the site of a Saxon house built for Canute, was the home of Henry Hamblin, the popular writer and spiritualist known as the 'Saint of Sussex'.

A mile to the east, in the direction of Chichester, is Fishbourne, site of the largest Roman villa in Britain.

Bosham is well signposted off the A27 just west of Chichester. There is a large pay and display visitor car park near the harbour and church. 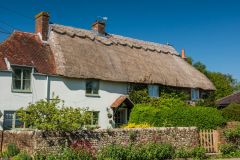 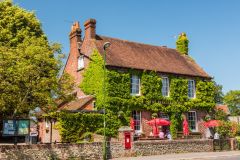 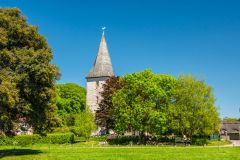 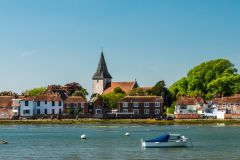 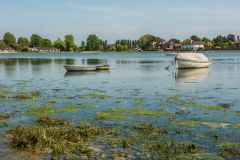 More self catering near Bosham >>

More bed and breakfasts near Bosham >>