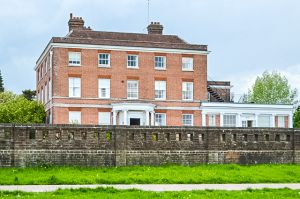 East Court Mansion, East Grinstead
East Grinstead is a large urban area, with its roots in the past. The town was granted a market charter in 1221, and for many centuries was a busy market town, as well as a centre of the iron industry.

The historic core of East Grinstead boasts some lovely old buildings, among them Sackville College, a row of almshouses which date to 1609. They were founded by Richard Sackville, Earl of Dorset, who intended them to serve as a retirement home for his estate workers at Knole and Buckhurst.

The College is administered by a warden, and it was in the warden's quarters at Sackville College that the Reverend John Mason Neale composed the popular Christmas carol, Good King Wenceslas.

The parish church of St Swithun is a late Georgian building, constructed to a design by James Wyatt, on the site of an earlier church which burned down in a disastrous fire. Near the south porch are memorials to three Protestants burned at the stake for heresy in 1556.

The East Grinstead Museum tells the story of the town and its history. It is located in an opulent late 18th-century mansion. And on the subject of fine houses, just outside East Grinstead is the National Trust property of Standen, a late Victorian mansion in the Arts and Crafts style. Also nearby is Saint Hill Manor, a Georgian manor house once owned by author L Ron Hubbard.

More self catering near East Grinstead >>