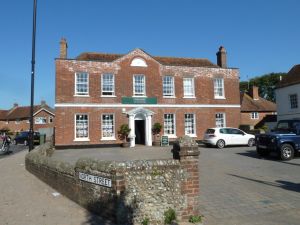 Storrington High Street
An old market town that dates back to the Saxon period. At the time of the Domesday Book Storrington was known as Estorchestone, or place of the storks. It has a long history as a market town, with a market charter granted in 1399. It later became a centre for tanning and fulling.

There are still remnants of the Saxon era lynchets, or strip farming, outside the town.

The Saxon church was enlarged in the Norman period, but it retains a good deal of the earlier building. Within the church is a Saxon coffin with a marble effigy of a crusader knight set atop the coffin lid.

One of the most interesting of the historic buildings still standing in Storrington is 4 Church Street, a medieval hall house probably built in the 15th century.

Just a few miles away from Storrington is Parham House, a great Tudor mansion which stands in superb grounds.

More self catering near Storrington >>

More bed and breakfasts near Storrington >>