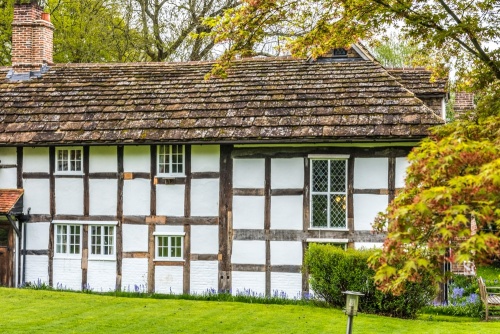 Blue Idol Meeting House is an attractive 16th-century timber-framed house that has been used as a Quaker meeting house since 1691. The meeting house has close links to William Penn, the founder of Pennsylvania, who helped buy the property and worshipped here on numerous occasions. Penn's daughter Letitia is buried in the burial ground outside the meeting house.

Also in the grounds is a timber-framed barn that began as a dwelling. It is thought to be one of the oldest buildings in West Sussex and now houses an exhibition on William Penn and the history of the Blue Idol Meeting House. 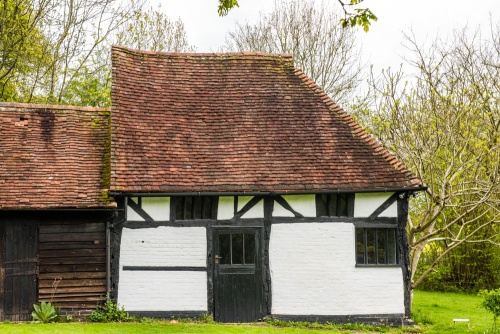 Penn is known to most people as the man who founded the colony (later the state) of Pennsylvania in America. His philosophy of religious and civil tolerance was written into the Pennsylvania charter of governance and was incorporated into the US Constitution of 1789.

Penn was the son of an Admiral, but at a young age he rebelled against the established Anglican religion and turned to the Society of Friends, or Quakers as they were derisively dubbed.

Penn lived with his first wife Gulielma at Warminghurst, in the neighbouring parish. Local Quakers regularly met at Penn's house and at a house owned by John Shaw in Shipley. 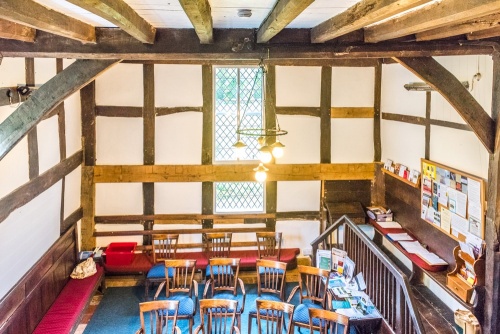 In 1691 Shaw loaned the meeting 53 pounds to buy the farmhouse known as Little Slatters, to be repaid at 3 pounds per year for 20 years. In 1701 he convinced the meeting to pay the remainder in a lump sum.

The Blue Idol Meeting House was built around 1580 as a farmhouse and was known as Little Slatters. You can see the 'maker's marks' carved by craftsmen into the timbers. Also carved into the timbers are apotropaic, or witches' marks, an inverted VV symbol thought to ward off evil.

Before the Toleration Act of 1688, Quakers and other non-Conformist religious sects were forced to hold gatherings in private houses, hidden from the authorities. After the act made religious gatherings legal, local Quakers decided to acquire a building to use for their meetings for worship - the Quaker equivalent of Anglican church services. 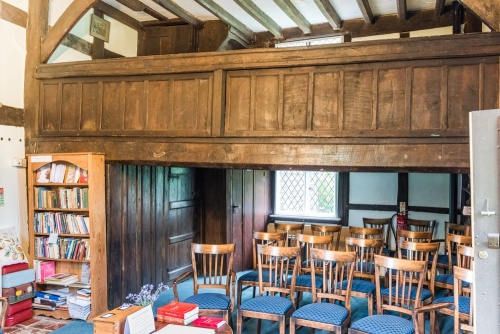 To make the farmhouse suitable for worship the Quakers removed floor beams on one side of the building to create a meeting area overlooked by a 'minister's gallery'. William Penn worshipped in this gallery. The story goes that he was often so keen to speak that he would enter the meeting room while doffing his hat and begin to speak before he even reached his seat in the gallery.

The gallery overlooks the small meeting area, with wooden benches around the outside of the room and a raised dais at one end. Against the wall is a wooden Bible box, beautifully carved on the front panel. Tucked away in a corner, half-hidden by the overhanging gallery, is a brick fireplace and a longcase clock made by D. Baker of nearby Billinghurst.

Like most Quaker meeting houses, the Blue Idol is plainly furnished, in line with Quaker values of simplicity. The 17th-century panelling is plainly carved, and the walls and ceilings are bare to the timber beams. This is an active meeting house and visitors are welcome to attend regular services. 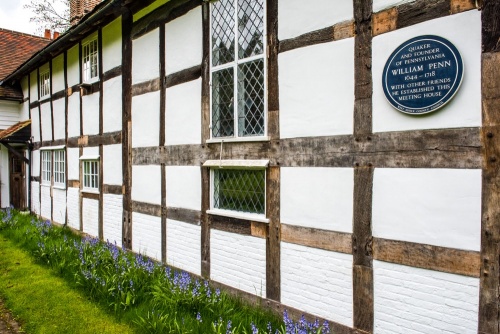 Why does the meeting house have such a peculiar name? The short answer is that no one knows. The prevailing theory is that regular meetings for worship ceased in 1793 and did not start again until 1869. During those 76 years when the meeting house sat idle, it was painted with a paint tinged with blue, hence 'blue idle', which morphed into 'Blue Idol'.

If that theory sounds farfetched, you're not alone, but the truth is that no one knows when and how the meeting house gained its unusual name.

Another theory is that it was named for a small blue ceramic figure found in the garden. 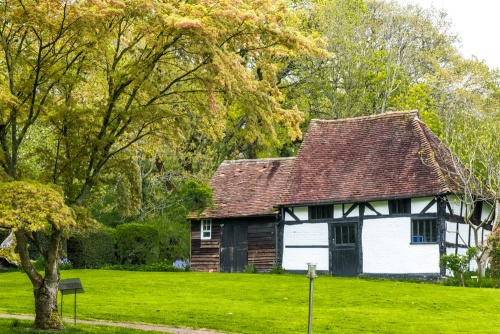 In one corner of the grounds is a small medieval stable, or barn, thought to be much older than the meeting house. The barn, or hovel, formed part of the original medieval farm. Before the farmhouse was built in 1580 the farmer lived in an upper chamber of the barn, with animals on the ground floor. The heat generated by the animals below helped keep the living quarters relatively warm.

The barn is remarkably well-preserved and you can see sections of the original medieval wattle and daub wall in a partition diving the ground-floor chamber. 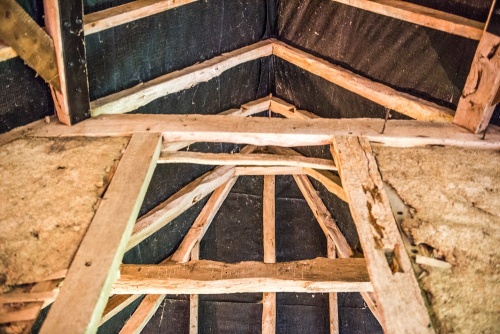 Inside the restored barn

In the Meeting House garden is a small burial ground holding the graves of around 30 early Quakers, though only some of the graves are marked by headstones.

Among those buried here is Priscilla Woolven, the daughter of the first Meeting House wardens (live-in caretakers). She attended the local primary school, where corporal punishment was commonly used to maintain discipline. Priscilla tragically died from brain injuries sustained when she was struck on the head by a teacher.

The incident prompted local Quakers to found their own primary school, named for William Penn, and operated in accord with Quaker values, including non-violence. The William Penn Primary School is still active today.

A short walk away is a second, larger burial ground, again holding many unmarked graves.

Many of those buried here were Quakers who died in Horsham Gaol in the 17th century, when they were imprisoned for offences such as refusing to swear an oath of allegiance to the king, refusing to pay tithes to the Anglican church, or holding open-air meetings for worship.

As for William Penn, he is buried at Jordans Friends Meeting House in Buckinghamshire. 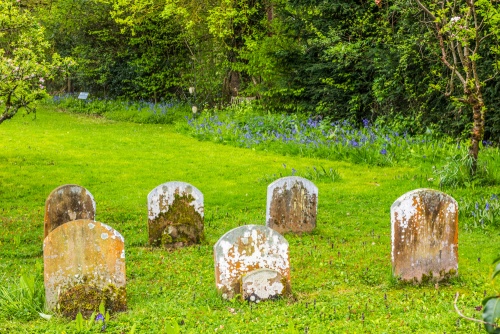 Some places exude a sense of peace and timelessness. The Blue Idol Meeting House is one of them. The Meeting House is located on Oldhouse Lane, off the A272 between Coolham and Coneyhurst. Be aware that the lane is poorly surfaced, so please drive carefully.

We were met by one of the resident wardens, who showed us the meeting house and explained about the history of the building, its connection with William Penn, and the early history of Quakerism. Then we were left to explore the peaceful grounds and the exhibition in the Hovel Barn.

In the Blue Idol garden is a William Penn trail, marked by small information panels that tell the story of Penn's life and his connection to the meeting house. The garden is open daily to visitors during daylight hours. The meeting house welcomes visitors for open days between March and November. As of this writing, open days are each Friday from 10-4pm, but please check with the official website before visiting, in case these times change.

The Blue Idol is one of those historic places that will live long in the memory. 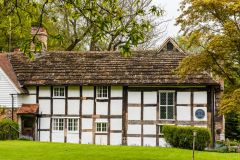 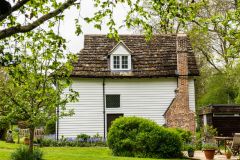 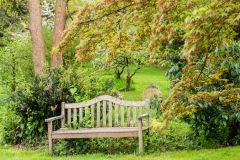 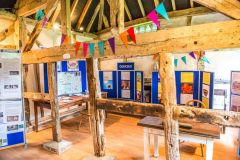 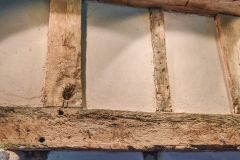