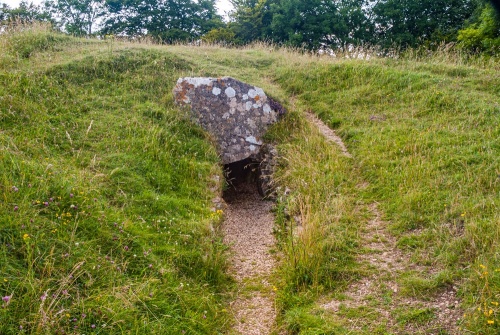 The mound is trapezoidal in shape and is oriented on a north-east south-west alignment. It is roughly 34 metres long, and 3 metres high at its highest point.

Like most Cotswold-Severn burials there is a small forecourt at the eastern end of the barrow, which leads past a pair of standing stones topped by a stone lintel. There is a central passage, with two burial chambers on either side and an end chamber.

When the site was excavated in the 19th century the remains of 15 skeletons were found. In addition, a later skeleton presumed to be Roman was found in the roof of the mound, along with three 4th century Roman coins. The barrow has been tentatively dated to 3300 - 3200 BCE.

The alternative name 'Hetty Pegler's Tump' comes from the name of the 17th-century owner of the site, Hetty Pegler. A tump is a slang term that emerged in the late 16th century, referring to a mound, or tumulus.

A Neolithic stone axe was found near the site, and this is now in Guy's Hospital museum.

As a piece of trivia, Uley was the first site to be placed into government care under the 'listed property' scheme, back in 1883.