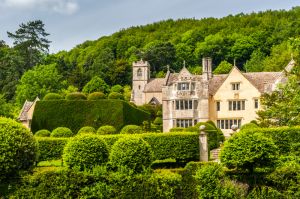 Owlpen Manor is a lovely Tudor manor house set in outstanding gardens. Owlpen was restored in 1926 after 100 years of neglect, by Cotswolds Arts and Crafts architect Norman Jewson. Painted cloth hangings dating from 1700 and share space with the Mander family collections of textiles, furnishings and fine art.

The manor house at Owlpen was begun around 1450. The name does not derive from owls, as you might imagine, but likely from a 9th-century Saxon thegn named Olla, who established a 'pen', or enclosure, beside a series of springs in this deep valley on the slope of the Cotswold escarpment.

The Olepenne family held land here at least as early as 1174, and at least 10 generations of the family lived at Owlpen, swearing fealty to the Berkeleys of Berkeley Castle. The Owlpens witnessed Berkeley charters and even acted as executors of Berkeley wills, so clearly they were a family of some importance in this area of Gloucestershire.

They must have had a substantial house here, for a timber beam incorporated in the Tudor mansion has been dated to 1294. The last of the Owlpen family - by now the name had been changed to de Olepenne - married into the Daunt family, and the line of direct Owlpens descendants came to an end. 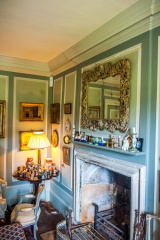 The Daunts were supporters of the Lancastrian cause in the Wars of the Roses, and family tradition says that Queen Margaret of Anjou spent a night at the manor on route to defeat at the Battle of Tewkesbury in 1471. Queen Margaret's ghost is said to haunt the Great Chamber - just one of four resident ghosts at Owlpen. Others include a black monk, a mischievous child, and a 17th-century alchemist.

In 1522 Christopher Daunt inherited Owlpen and proceeded to rebuild the 15th-century manor in grand style, adding the current centre and east ranges. The Daunt fortunes became entangled with the Throckmortons through a bewildering set of entailed wills and lawsuits until Thomas Daunt took over the estate in the early 17th century.

Thomas Daunt rebuilt the earlier west range and added a large bay window that is one of the Manor's most distinctive features. The Owlpen we see today is essentially as it was when Thomas Daunt finished his alterations; an early 16th-century manor incorporating Tudor and medieval features to create one of the most picturesque and historic manor houses in England, and certainly located in one of England's best settings.

A later Thomas Daunt, the 7th of that name, was locally reputed to be a magician. The room in which Daunt kept his papers and books was kept sealed and rumoured to be haunted, but on his death in 1803 a parson was sent for to burn the papers. During the burning, 'birds flew out of them', which must have alarmed the poor parson no end! 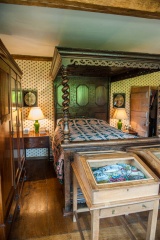 Within the manor are painted cloth hangings dating from 1700, illustrating the life of Joseph. There are also family collections of textiles, Tudor wall paintings and plasterwork, fine furnishings and art. 17th-century yews highlight the formal terraced gardens, and further afield there is a Georgian mill pond, fed by seven springs. Behind the manor is a delightful little church, decorated with a profusion of Victorian stencilling.

Owlpen is usually only open to pre-booked group tours, though it may also be open for heritage open days. The manor also runs a series of self-catering cottages, so if you fancy staying in the grounds of a romantic Tudor manor, Owlpen may be your perfect destination!

We had the pleasure of visiting Owlpen on a group tour on a glorious sunny day in mid-summer. The gardens were lush with colour, and the house seems to have grown organically out of the green hills that encircle it.

We were due to be given a tour by the owner himself, but unfortunately, he had been called away by a family emergency, and we were taken around the house by a volunteer who regaled us with stories about the house and its history, and pointed out interesting objects around the house.

There were certainly a lot of objects to point out; it seemed like every surface was piled high with the memorabilia of centuries, from peculiar old toys, lamps, ceramics, hunting trophies, books, and a wealth of small owl figures. For, as you might imagine, the symbol of Owlpen is an owl, and it has become a practice for family friends to give the owners owl figures of every shape and size as gifts. There are owls everywhere! 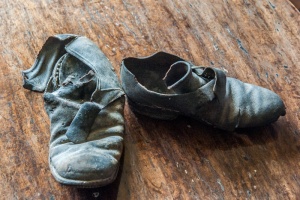 Monk's shoes found in the walls

But of course, there is a lot more; Owlpen is very much a family home, not a museum showpiece. There are family portraits, letters, documents, and maps. One fascinating item on display was a pair of medieval monk's shoes, found behind the walls during repair work. Why were they placed there? One theory is that placing shoes in the walls during construction was supposed to bring good luck.

One room, in particular, deserves mention; the oldest part of the ground floor was transformed during the Georgian period with elegant painted panelling and neoclassical decoration.

The effect is wonderful, and almost startling compared to the much older medieval and Jacobean atmosphere in the rest of the house. It is also quite an odd chamber, for the floor has been raised to make it level with the rest of the house, and the result is that parts of the room appear oddly proportioned, almost squashed to fit.

Our friendly guide also told us that the ghost stories were more than just old tales; she herself had experienced something supernatural while in the upper bedrooms. Is there really a ghost at Owlpen? I didn't experience anything untoward, but who's to say? What I did experience was a quirky, atmospheric, and perfectly wonderful historic house, in one of the most idyllic Cotswold settings you can imagine. 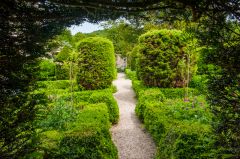 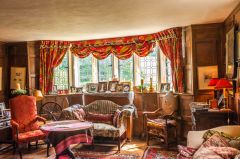 More self catering near Owlpen Manor >>