HERITAGE HIGHLIGHTS:   One of the last monastic buildings built in England before the Dissolution of the Monasteries. 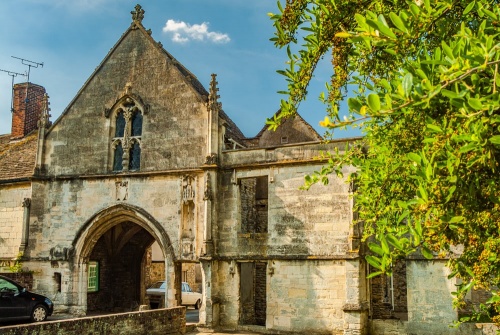 A 16th-century gatehouse is all that remains of medieval Kingswood Abbey. The gatehouse is composed of a wide central arch with a gabled chamber above, and two-storey precinct walls to either side. A modern road runs under the gateway arch. The mullioned window above the archway is beautifully sculptured in late Perpendicular style.

Kingswood Abbey Gatehouse is of particular interest because it was one of the last monastic buildings to be built in England before the Dissolution of the Monasteries ended the traditional monastic way of life.

The abbey was established in 1139 by William de Berkeley as a Cistercian monastery, a daughter house of Tintern Abbey across the Severn in Wales. The abbey moved from Kingswood to Hazleton, but the monks returned to Kingswood in 1164 and refounded the abbey on a new site. Surprisingly, historians have been unable to establish where the abbey church was situated. 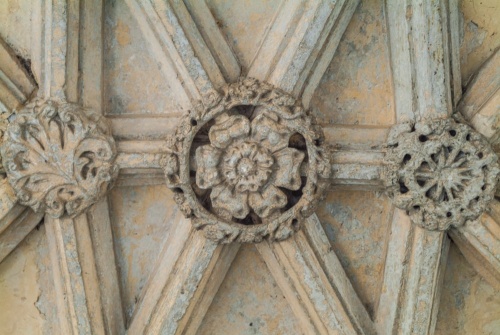 After Kingswood Abbey was dissolved by Henry VIII in 1538 some of the stone was used in the construction of nearby Newark Park. The Lady Chapel of the abbey church was used as the parish church until it became ruinous and had to be rebuilt in 1723. The abbey records are held at the University of Bristol.

The gatehouse exterior is free to explore at any time, but the interior can be viewed by obtaining a key from a nearby keyholder, weekdays only. The gatehouse is in the centre of Kingswood, with easy parking along the road. 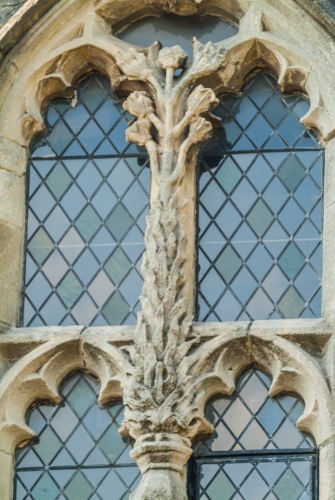 Mullion in the form of a lily

Highlights include graceful lierne vaulting under the gatehouse arch. The vaulting bosses are beautifully carved, with designs including floral and foliage patterns, and a large Tudor rose, which is somewhat ironic considering that Henry Tudor would shortly be responsible for the abbey's demise.

The gatehouse gable is richly carved, with designs representing aspects of the Annunciation and the Crucifixion. To the right of the arch is a niche with the figure of a dove, while the central window has a mullion in the form of a lily in a vase. Over the gable peak is a depiction of the Crucifixion, while directly over the arch is a carving of an angel holding a blank shield.

The carvings are badly weathered, but the quality is outstanding, and gives a hint of how impressive they must have been when they were made almost 500 years ago. 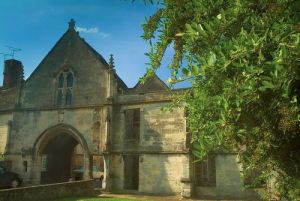