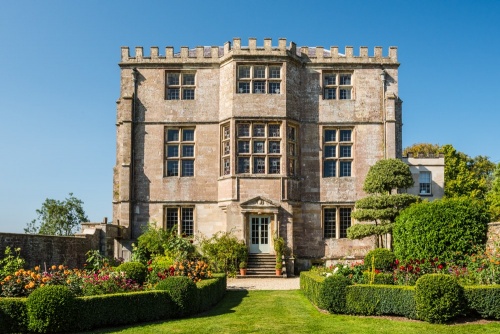 Newark Park was built around the year 1550 by Sir Nicholas Poyntz, who wanted a convenient hunting lodge. Poyntz lived at Acton Court, near Bristol, about 10 miles away, and created Newark Park to offer evening respite for himself and his guests after a day of hunting in the area. To supply his 'New Work' Poyntz used stone from the Abbey at Kingswood, which had been destroyed in Henry VIII's Dissolution of the Monasteries.

The lodge was built on four floors. In the basement were kitchens, reception rooms occupied the ground floor, a banqueting room took up the first floor, and the top floor was reserved for sleeping quarters.

The house occupies a location on the edge of a high cliff looking out over a lovely Cotswold landscape of trees and fields to the River Severn. The house is surrounded by over 700 acres of countryside, with peaceful walks available through the surrounding woods. 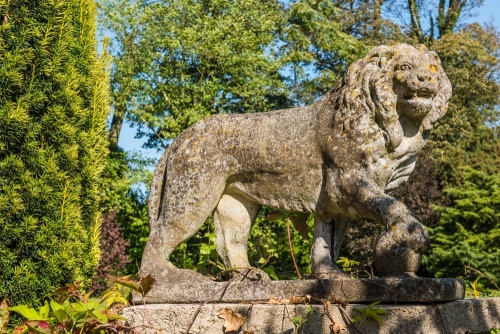 A lion statue outside the entrance

The Tudor hunting lodge was remodelled in 1790 by architect James Wyatt for the Clutterbuck family. Wyatt's design transformed Newark from a hunting lodge into an elegant house. The most immediately impressive aspect of Wyatt's interior work is the cantilevered stone staircase which rises from the entry hall to the first floor.

On the staircase landing is 'The Clutterbuck Window', a remarkable mullioned bay window filled with colourful 18th-century heraldic glass in Flemish style. The style is no accident; the Clutterbucks originated in Holland and came to England during the religious persecution off Huguenots in the Elizabethan period. Many settled in Gloucestershire where the family became prominent in business and politics.

The Clutterbucks also landscaped the surrounding pleasure garden and parkland in the fashionable picturesque style. They added a serpentine carriage drive through the estate, designed to give glimpses of the house and the surrounding views from strategic vantage points. They also altered the house to create a square building with an impressive south facade looking out over wooded valleys to the south.

The Clutterbucks leased Newark Park to the King family from 1898-1949. The King family added a two-storey service wing and a porch. They redecorated some interior rooms with William Morris wallpaper and developed the woodland garden. 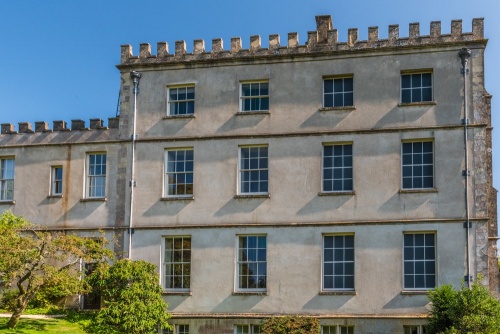 Can you tell which windows are fakes?

After the King family left in 1949 the house left to the National Trust, but it was in such poor condition that the Trust considered taking the roof off and letting it become a romantic ruin.

That might have been its fate if not for Robert Parsons, an American architect from Texas. Parsons served with the US Army in World War Two when he was stationed in England. He worked out an agreement with the National Trust that would let him pay a nominal rent in exchange for taking on the Herculean task of restoring the historic house and grounds. When he came to Newark Park it was in danger of collapse, but over the next several decades he used his architectural skills to slowly restore the building.

The interior of Newark is a fascinating mix of period furniture, modern art, and an eccentric jumble of collected artefacts from across the globe. This is very much a 'lived in' house; here you get none of the sterile feeling that sometimes occurs in stately homes. 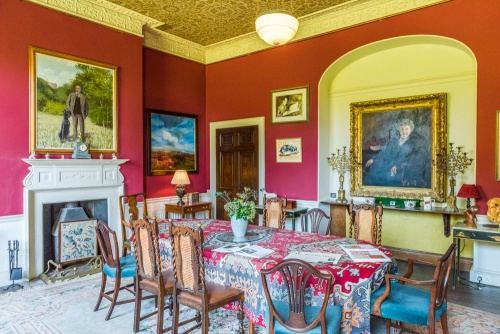 At the top of the house is a bedroom that formed part of the Stuart long gallery created in 1650 when the Tudor hunting lodge was extended. The Long Gallery was used for exercise on rainy days and for showing off the family's fine art collection. The long gallery was altered around 1800 to create this bedroom and the neighbouring Exhibition Gallery. The bedroom was used by the Laura Ashley company as the setting for an advertisement in 1988 and the wall hangings are original Laura Ashley designs.

If you walk around the house you will see that a large number of windows on the western facade are fake; they are simply painted on. These are not, as you might expect, windows that were blocked in to avoid paying the infamous window tax, but were rather an attempt to follow the Georgian fashion for symmetry; they balance out real windows on the same side of the house. 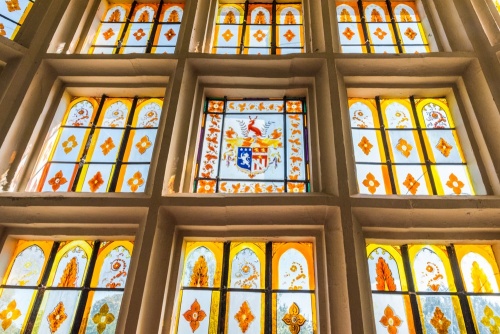 Newark has the reputation of being haunted. One legend is that the spirits of the monks of Kingswood Abbey were brought here with the stone from their old abbey. If you are not put off by ghost stories you may want to consider staying in this historic house; the National Trust have converted part of the house into a self-catering flat with space for 6 guests.

The grounds are largely undeveloped, consisting of informal woodlands split by paths, allowing for long and short circular walks. At the base of the cliff below the house itself is a small lake, fronted by a walled garden and a summer house. The garden is bounded on the uphill side by a 'crinkle-crankle' wall, a high brick wall designed to curve back and forth like the ripple of a wave.

The summer house was lost for many years behind a tangle of vines and was only rediscovered when a tenant of Newark followed a pig into the undergrowth. The area has now been cleared and is in the process of being restored.

At the western end of the original carriage drive is a 19th-century folly in the shape of castle battlements. 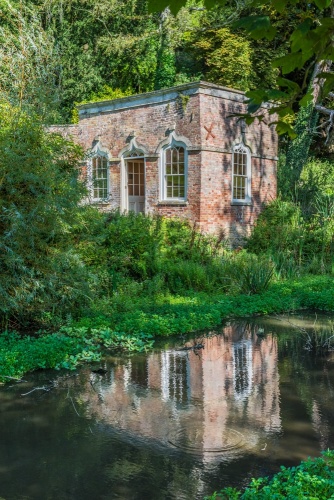 Newark Park is located on a very narrow lane just off the A4135 at Ozleworth, just east of Wotton under Edge. Plentiful parking is available. The Cotswold Way long-distance trail also passes through the property, making the house and grounds a good stop-off point on a longer walk. 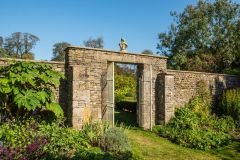 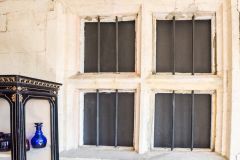 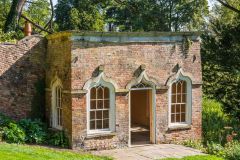 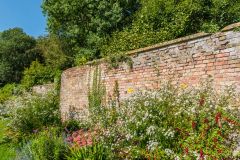 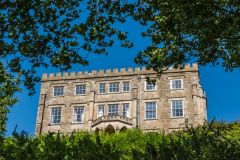 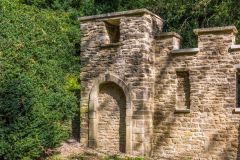 More self catering near Newark Park