HERITAGE HIGHLIGHTS:   Look for the hole made a Civil War cannonball 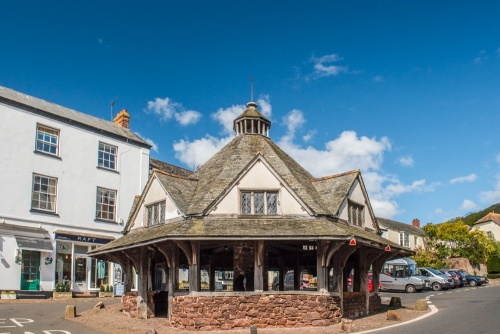 Dunster Yarn Market is a Jacobean market cross on Dunster High Street, at the opposite end of the street from medieval Dunster Castle. The Yarn Market is a striking octagonal building measuring 9.4 metres in diameter (about 31 feet). The building is supported on a huge central pier with a massive timber frame resting on a low stone wall.

The floor of the Yarn Market is cobbled stone, and the structure is topped by a slate roof with a central wooden lantern where a bell was hung. Atop the lantern is a weathervane dated to 1647.

Gables in each of the eight sides contain mullioned windows that help shed light on the market area inside. Eaves project well outside the line of supporting upright posts, allowing prospective customers to examine the cloth on sale while staying out of the weather.

The Yarn Market was built in 1609 by George Luttrell of Dunster Castle to provide shelter for merchants during Dunster's regular markets. Dunster was a busy centre for trading wool, with shepherds bringing wool fleeces from the high moors of Exmoor to sell at Dunster.

In the medieval period, Dunster was a coastal village with a thriving port where wool purchased at the market could be exported. There is no trace of the port today, for the sea has retreated, leaving Dunster about 2miles inland.

The retreating sea should have spelled the end of Dunster's thriving wool market, but by the Tudor period finished cloth was more in demand than raw wool. Several woollen mills were built in the Dunster area so that merchants could now sell finished cloth in the Yarn Market.

The building was used as a market for selling Dunster cloth and kerseymere, a fine woollen cloth with a twill weave, woven from long wool and often ribbed. So important was the Dunster cloth trade that an Act of Parliament was passed in 1607 to regulate exactly how the kersey cloth type known as 'Dunsters' could be made.

Naturally enough, the merchants wanted a sheltered place out of the weather to show their wares, and the Yarn Market was the answer. It also helped provide more security than selling in the open air did, so the merchants were doubly happy.

The Yarn Market was damaged during the Civil War when Dunster Castle was under siege for 160 days. You can still see the hole made by a Civil War cannonball on one of the large oak beams. The building was restored in 1647, the date which appears on the weathervane.

The Yarn Market is very easy to find. It stands at the end of High Street, a short walk from the main visitor car park, and is signposted from around the village. 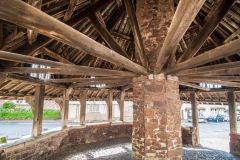 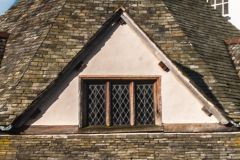 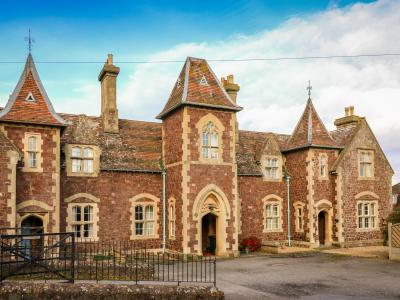