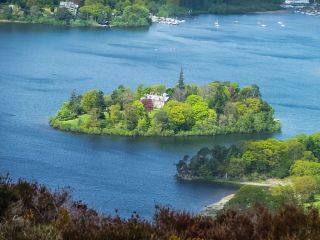 Derwent Island House
Of all the visitors who come to the Derwentwater area, few realize that a historic house lurks in isolated splendour in the middle of the lake. Derwent Island House is a historic 18th-century house, standing on a small wooded isle in the centre of the lake. It is the only inhabited island in the Lake District open to visitors.

During the medieval period, the island was owned by the monks of Fountains Abbey in Yorkshire. When the abbey was suppressed during the Dissolution of the Monasteries the island passed into Crown hands. In 1569 Elizabeth I sold it to the Company of Mines Royal, a group of German mining engineers operating in the Lake District.

Derwent House was built by an eccentric Georgian man named Joseph Pocklington shortly after he took ownership of the island in 1778. In addition to the house, Pocklington also built a combination chapel and boathouse, and indulged his eccentric fancy by erecting a Druid's circle on the island.

He also built a small fort which he used for mock battles during an annual regatta. He invited residents of Keswick to 'invade' Derwent Isle and he would fire an (unloaded) cannon at them as they approached.

In 1844 the house was sold to Henry Marshall, a wealthy flax-spinning entrepreneur from Leeds. Marshall called in the popular architect Anthony Salvin to extend the house with a three-storey tower and a large dining room. Salvin also remodelled the interior in neoclassical style.

Later generations of the Marshall family were fond of entertaining, and among visitors welcomed here were Octavia Hill, Sir Robert Hunter and Canon Hardwicke Rawnsley, the three original founders of the National Trust. It seems appropriate, then, that David Marshall, the last private owner of Derwent Isle, gave the house and island to the National Trust in 1961.

The house stands within a period garden that has now been restored. The interiors are furnished in neoclassical style.

Derwent Island is the most northerly island in Derwent Water. It is also the largest, but that doesn't mean it is big! The island measures just 250m (820 feet) long and 150m (492 feet) wide.

Derwent Island House is tenanted but is open to visitors on set days throughout the year. Pre-booking is essential - please check with the National Trust website for details. Visitors cross to the island in canoes attached together in pairs to form rafts.

You do need to paddle yourself, but each canoe trip has two qualified canoeing instructors, so don't worry if you are a novice canoeist! It takes just five easy minutes of paddling to reach Derwent Island. When you arrive your tour guide will take you on a tour of the house that takes about 45 minutes. You are then free to explore the island. Your stay on the island is about two hours, plus another 30 minutes for your trip there and back.

If you don't fancy the paddle to Derwent Isle you can still get a good view of the island and the house from the path to Friar's Crag and the shore of Derwent Water just outside Keswick.