HERITAGE HIGHLIGHTS:   One of the highlights of English heritage; the superb vaulting of the undercroft should not be missed. 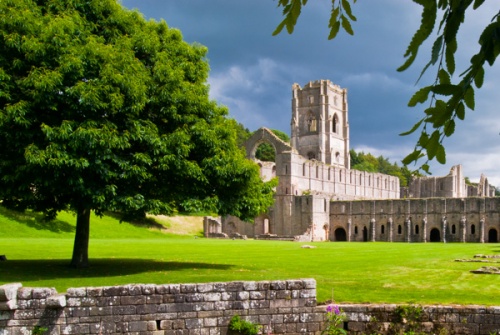 There is so much to see at Fountains that it is impossible to think of it as a single historic attraction. It is much more; a magnificent medieval abbey, an elegant Georgian water garden, a richly decorated Victorian church, and a medieval deer park. We'll start with the earliest monument, the abbey.

Fountains Abbey was established by Benedictine monks from St Mary's Abbey in York, in 1132. Within a year, however, it was turned over to the Cistercian order, who intended to use it as a centre for missionary work in the north of England, and as a mother house for further monasteries in the north and into Scotland. Inside 50 years Fountains had become the most important Cistercian house in England.

The original abbey was a random scattering of simple timber structures, but through the 1140s these were gradually replaced with a more formal arrangement around a traditional monastic cloister. The church was the first building to be rebuilt in stone, and this was finished by 1136. However, in 1146 the timber buildings burned down and the monks were forced to start again.

What's in a name?
The name 'Fountains Abbey' comes from the large number of natural springs in the area. Certainly, the monks were never short of water. Today the abbey ruins are part of the elegant 18th-century water garden of Studley Royal park, so water continues to play an important part in the story of Fountains.

The abbey buildings were gradually rebuilt in stone, and under powerful abbots like Henry Murdac (1144-1147) and Robert of Pipewell (1170-1180), Fountains began to grow into one of the largest and wealthiest abbeys in England. A large part of that wealth was based on sheep; Fountains was known for its wool, and trading in that wool brought enormous wealth to the abbey over the entire medieval period.

A large amount of that wealth was put into enlarging the abbey buildings and enriching the architecture. The fruits of that wealth can be seen today in the extraordinarily rich decoration of the abbey ruins, particularly the magnificent vaulting of the undercroft, which is one of the true high points of medieval Gothic architecture in England.

The Cistercians had a very highly developed system, which varied little from one abbey to the next. For a start, most Cistercian houses were established in remote areas, far from the temptations and distractions of town and city life. The monks devoted themselves to spiritual devotion, and the day-to-day labour was left to lay brothers. These lay brothers worked the fields and tended sheep, and also managed far-flung estates granted to the monastery over time. 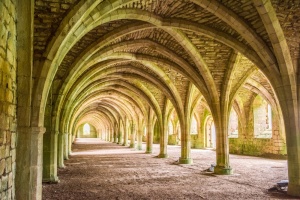 As with many medieval monasteries, the wealth of Fountains lay in sheep farming, and wool provided enormous income to the abbey in the early medieval period. But this golden age at Fountains fell foul to a combination of raids from Scotland, poor harvests, and the devastating effects of the Black Death.

The result of these factors was an economic disaster; the system that had served Fountains so well for centuries could not be maintained, and hired servants replaced the lay brothers. These servants were quartered in the Outer Court, south of the River Skell.

See our map of Fountains Abbey to get a better idea of how the abbey was laid out.

Like all monasteries in England, Fountains fell foul of Henry VIII's reforming zeal, and the abbey was dissolved in 1539. The crown sold off the abbey and 500 acres of land in 1540. Stone from the monastic buildings was used by Sir Stephen Proctor to build nearby Fountain Hall in 1598-1604.

Proctor did not get along with the Mallorie family who owned the neighbouring Studley Royal estate since the late 15th century. He was a firm Protestant and was suspected of acting as an informer against his Catholic neighbours on behalf of James I.

If he did have royal support it did not help with his legal bills, for Proctor died in debt. Fountains Hall was owned by John Messenger and the Messenger family held it until 1768 when it was purchased by William Aislabie, who combined the two estates into one. 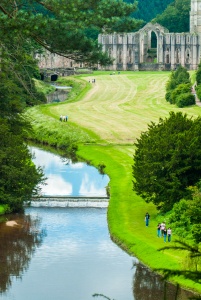 Aislabie incorporated the abbey ruins into his parkland, intending it as a picturesque garden feature; a focal point for his landscaped water garden. Aislabie demolished some abbey features and embellished others in an attempt to make the ruins fit with his romantic ideals. When archaeologists investigated the abbey site in the 1850s they removed many of Aislabie's 'improvements'.

A stone precinct wall, built in the early 13th century, encircles the abbey. This wall survives to its full height on the south and southwest of the site. To the south-east of the abbey ruins is the site of the Seven Sisters, a cluster of yew trees where monks sheltered from the elements while erecting the first timber buildings at Fountains. Only two of the original seven trees remain, protected by a fenced enclosure. 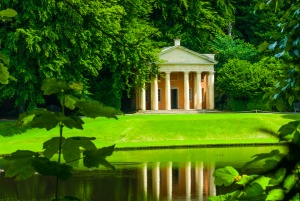 Near the abbey is Fountains Mill, the former corn mill for the monks, established in the 1130s. This was rebuilt in the 1150s with two wheels atop a dam. In the 13th century, a granary was added above the mill. In the 1840s the old medieval mill was remodelled to drive a sawmill, and in the early 20th century it was used to generate electricity. The mill was completely restored in 1993 and now gives visitors a chance to watch the 1840s wheel in operation.

A short stroll along the Skell from the abbey ruins brings you to Studley Royal Water Gardens, an elegant 18th-century landscape of curving pools and classical statues, grottos, temples, and terraces, surrounded by a medieval deer park.

There are fabulous views from Anne Boleyn's Seat, on Surprise Hill, looking back along the river to the soaring tower of Fountains.

Every time I've climbed the hill to the viewpoint I have found artists sitting quietly, painting the view. Once you see it, you'll know why; it truly must be one of the finest views in England.

Another of the garden highlights is the Serpentine Tunnel, a winding - and completely dark - tunnel rising up from the river to High Ride. The Serpentine was intended to give guests to Studley Royal an enjoyable shiver as they passed through darkness and emerged into the light. 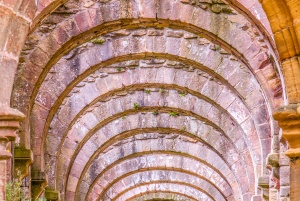 Though we tend to think of Studley Royal as a Georgian creation, there was actually a park here as early as 1343. We know very little about the park until 1577 when there is documentary evidence that it was used as a deer park.

The northern section of the park was landscaped in the 1680s, with the addition of avenues. But the real transformation began in 1718 when John Aislabie, former Exchequer, was expelled from the government for his role in the South Sea Bubble scandal.

Aislabie retired to his Yorkshire estates and devoted himself to creating a fashionable pleasure ground and water garden from his parkland. John's work was finished by his son William, who finally incorporated the abbey ruins into the park.

A subsequent owner, George Robinson, 1st Marquis of Ripon, built St Mary's church and removed a number of garden features. In the 19th century, Studley Royal was a popular destination for sightseers, and in 1853 an admission fee was charged for the first time. As for the intriguing church, it is situated on an avenue aligned with the west front of Ripon Cathedral.

St Mary's is one of a pair of churches built to commemorate Frederick Vyner, brother of Henrietta, the 1st Marchioness of Ripon. Architect William Burges designed St Mary's and its sister church at Skelton on Ure, in Early English style, considered by most Victorians to be the most perfectly 'English' form of architecture.

The interior decoration represents Paradise Lost and Paradise Regained, with ornate furnishings in glass, polished marble, stonework, mosaics, and gilding. The church was active from 1877 until it was declared redundant in 1970.

I've been lucky enough to visit Fountains several times. I love it. It can be crowded, particularly on sunny summer days, but the grounds are large enough to take plenty of visitors. Many families bring picnics and relax amid the ruins. For atmosphere and a beautiful setting it is hard to beat. 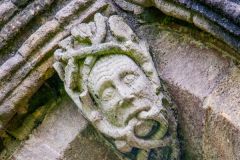 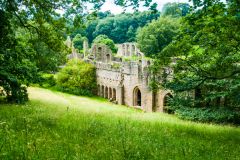 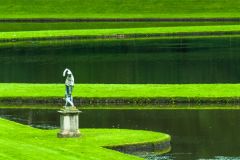 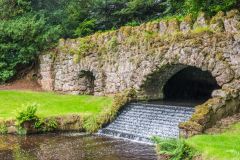 More self catering near Fountains Abbey