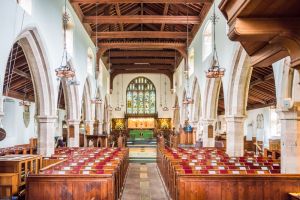 A fascinating 12th-century church built on the site of older churches dating to the 6th century. Later additions date from the 16th and 19th centuries. The church is dedicated to St Kentigern, who came to this area in the mid 6th century.

Kentigern (also known as St Mungo) was driven from his native Glasgow by a pagan ruler and came south into what is now Cumbria. Around AD 553 He set up his cross and established a church in a wooded clearing, or 'thwaite', and that is the origin of the place name Crosthwaite.

Of Kentigern's 6th century church, no trace can be found today. The oldest part of the current church dates to a Norman rebuilding in 1180, under the patronage of Alice de Romili, Lady of Allerdale. Lady Alice was moved to found the church, repair Carlisle Cathedral, and also establish Bolton Abbey after her son tragically drowned. Richard I granted Crosthwaite to Fountains Abbey, and for over 3 centuries the monks of Fountains supplied vicars to Crosthwaite. 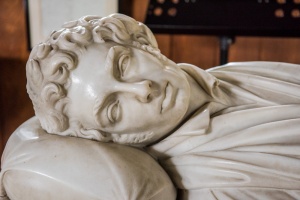 St Kentigern's was rebuilt in the mid-14th century and again in 1523. Much of the present building dates to this 16th-century rebuilding, and to an extensive renovation by Gilbert Scott in 1844.

Poet Robert Southey is buried in the churchyard, and a memorial stands in the south-east corner. Southey worshipped at Crosthwaite for 40 years.

While the poet's grave is a fairly plain affair in local slate, his memorial inside the church is anything but simple. A marble effigy of the poet, carved in 1842 by sculptor JG Lough, is set upon an altar tomb, one hand on his heart and the other on a book.

The epitaph is by Southey's friend and fellow poet William Wordsworth; "Ye Vales and Hills, whose beauty hither drew, The poet's steps, and fixed him here, on you, His eyes have closed."

Near Southey's memorial is the Radcliffe chapel, with a pair of alabaster effigies, thought to represent Thomas Radcliffe and his wife (c. 1495). The font dates to 1395 and is elaborately carved, with a memorial to Sir Thomas of Eskhead.

In the churchyard, a short stroll from Southey's grave, is the grave of Canon Rawnsley, co-founder of the National Trust. Rawnsley designed the church gates and the brass decoration on the reredos. A memorial plaque to Rawnsley is on the wall by the font, just inside the south door of the church.

The pride of St Kentigern's is a complete set of Tudor consecration crosses, 9 inside the church and 3 outside. Though most of the stained glass is Victorian, several fragments of 12th-century glass remain.

The church is usually open daylight hours and is signposted off the B5289 (High Hill) on the northwestern fringe of Keswick. There is limited parking outside the church and more in the parking area for the neighbouring school. We were lucky to visit just as the vicar arrived to fine-tune the PA system, and he was happy to find us a brochure on the church's history and share his enthusiasm for his lovely historic church. 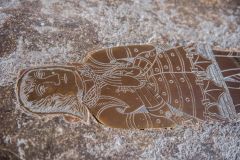 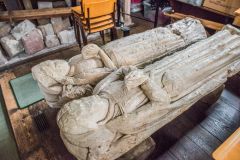 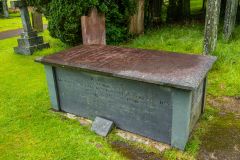