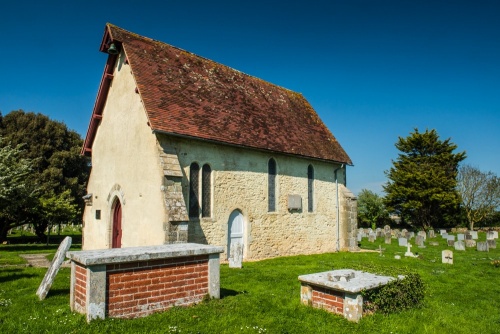 St Wilfrids is all that remains of a large Norman church on a site beside Pagham Harbour. The current church is actually the 13th-century chancel of the Norman building.

In 1864 remainder of the Norman church was disassembled and relocated to its current location in the centre of Selsey. The chancel of the old church was left in this relatively quiet spot to act as a mortuary chapel. St Wilfrid's was given chapel status by Bishop Ridgeway in 1917.

The interior is a fascinating mix of old and new. The 'old' is provided by a stunning Tudor memorial to John and Agnes Lewis. The Lewis memorial dates to 1537, and is based around two carvings; one depicting the martyrdom of St Agatha, the other showing St George killing a dragon.

The 'new' is provided by very colourful stained glass by local artists, showing scenes around Selsey and beyond. One window shows animals in their habitat at a nearby nature reserve. Another is created around the theme of the role of women in relieving suffering around the world. 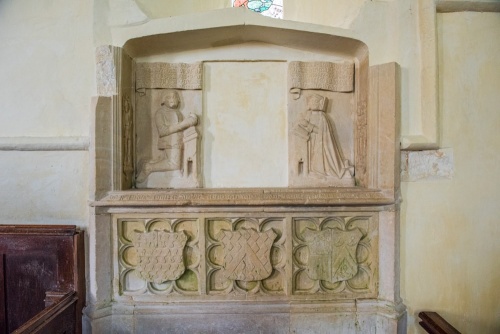 The dedication of the church to St Wilfrid is worth noting. Wilfrid was a 7th-century missionary who founded a monastery on royal land at Selsey. From the 8th century, until 1075 Wilfrid's monastery served as the bishop's seat. In 1075 the cathedral was moved to Chichester. It is likely that the current church stands on the site of Wilfrid's monastic church, or very near the spot. After the cathedral moved to Chichester the original church remained to serve as a parish church for the local population.

The chancel arch is 12th century, while several of the windows appear to be 17th-century work. There are a 13th-century aumbry and a piscina of similar age. The font is Victorian and is thought to have been come from the demolished church of St Martin at Chichester, along with a dozen oak benches. The original late Saxon font was installed in Selsey church.

In the floor of the small vestry beside the west door you can see a pair of medieval grave slabs boasting inscribed crosses. The stylised cross from the gravestones was used by the Friends of St Wilfrid's Chapel as their symbol. 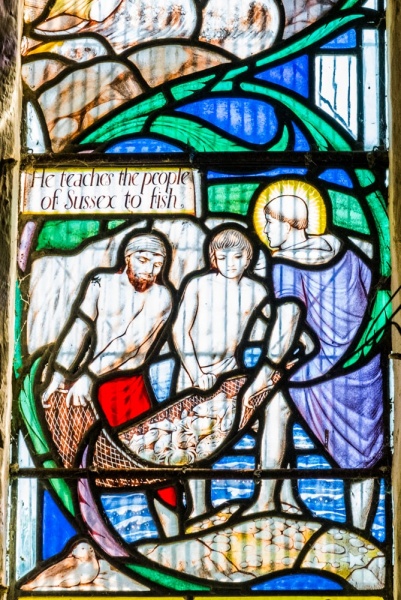 St Wilfrid teaches the men of Sussex to fish

There are several interesting memorials including a tablet to William Clayton, who tragically died at the age of just 18 on the island of Lombok in Indonesia in 1835.

The colourful east window was given by Maurice Wingfield in 1918 in memory of his brother John, who died in WWI, his friend Thomas Agar-Roberts, who also died in the war, and his sister-in-law Stephanie Agnes, who died in 1918.

The window is composed of three lights. On the left is John in the guise of St Michael, wearing gilded armour. In the centre light is Stephanie Agnes in the guise of St Agnes, with a Lamb of God, or Agnus Dei, a play on words of Stephanie's name. The right-hand light shows Thomas dressed in medieval armour, appearing as St George, the dragon at his feet.

At the top of the window is the figure of St Wilfrid, holding a model of his church, and with him is King Ethelwald, who gave him the land to build his church. The window was created by the firm of Heaton, Butler and Bayne.

In the south wall is a window donated by Lady Mackenzie in memory of her husband Sir Moir Mackenzie, VP of the Federation of British Industry and President of the Scottish Rugby Football Union. The window depicts scenes from the life of St Wilfrid, including a legendary episode where he shows the men of Sussex how to use a net to catch fish.

Outside the church are moated earthworks thought to be all that remains of an 11th-century castle.

St Wilfrid's is a very popular stopover for walkers enjoying the wealth of nature trails around Selsey. There is access to the Pagham Harbour Local Nature Reserve from the parking area just outside the churchyard. 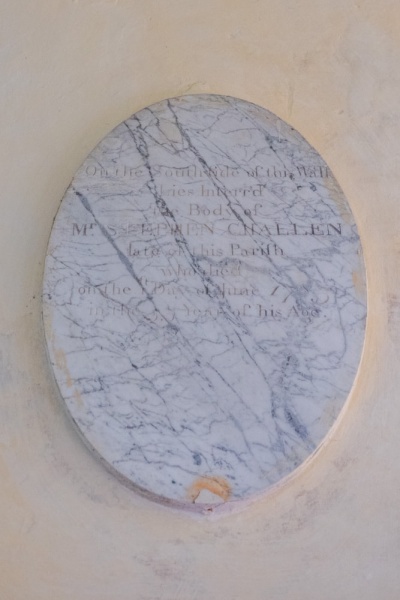 The church is no longer used for regular worship and is in the care of the Churches Conservation Trust. It is easy to find, being well-signposted of the B2145 just north of Selsey. Just follow the minor road all the way to its end and you will find a large parking area outside the churchyard. Opposite the parking area you can see the moat and mound of Church Norton Castle.

It won't take long to explore this tiny church, but it is well worth seeking out for the wonderful secluded location. Do take the opportunity to enjoy a walk along the shore and the chance to spot local birds from a bird hide just a few hundred yards north. 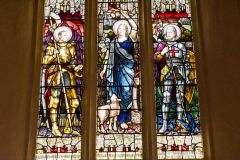