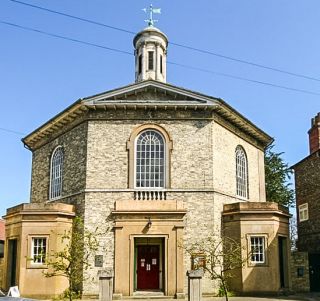 Chichester, St John the Evangelist
The West Sussex city of Chichester is perhaps best known for its marvellous cathedral, but there are several other historic churches to enjoy in the city.

Among these is the early 19th-century church of St John the Evangelist, on St John's Street, which, though not among the older churches in Chichester, is one of the more architecturally interesting. The church is built of pale-coloured brick to an octagonal design and is topped by a domed turret rising above a classical pediment.

St John's was begun in 1812 as a 'preaching house' for Evangelical members of the Church of England. Interestingly, it was not a parish church; it was funded by private subscription and operated by a board of trustees. Ministers for the church were not paid by the Church of England, but rather, by rents from the leasing of gallery pews.

Naturally, only the well-to-do members of the congregation could afford to rent pews, which were individually numbered to distinguish one pew from the next. These numbered pews had their own separate entrances, kept well apart from the riffraff in the free benches below.

The interior presents a fascinating glimpse into how Evangelical beliefs differed in principle from traditional C of E; whereas a traditional parish church would have a sizeable chancel, where the altar was located, and a pulpit generally off to one side of the chancel arch, St John's has a negligible chancel, and a grandiose three-tiered pulpit centrally located, where the minister could be seen and heard easily.

This unusual layout is explained by the Evangelical belief in the value of sermons and scriptural readings, and the fact that they placed less importance on the act of Holy Communion.

The interior is practically untouched since it was built, which is rather unusual given the later Victorian passion for rebuilding and restructuring churches according to their own ideals. The church is one of the few remaining proprietary chapels in England, and as such is of great historical importance.

St John the Evangelist is no longer used for regular worship and is in the care of the Churches Conservation Trust, who keep it open most days for visitors.

More self catering near Chichester, St John the Evangelist >>

More bed and breakfasts near Chichester, St John the Evangelist >>